Needless to say, the 2016 Unforgettable Gala was a night filled with fun, celebrating with all our sponsors and guests. Here’s a glimpse at what the award recipients had to say:

Kicking off his acceptance speech with his equally iconic “Oh my,” George Takei was the recipient of this year’s Icon Award, an award given to individuals who are influential both on and off-screen. As an activist, George is always willing to speak out on injustice, and so it was only fitting that Takei be recognized for his life and career, one that now spans several decades. “This evening and this moment, for me, will always be unforgettable,” he said.

As award presenter Ming-Na Wen put it, “It’s hard enough being a woman in Hollywood. It’s even harder being a woman, behind the camera, commanding the film.” But that’s exactly what Jennifer Yuh Nelson, the recipient of this year’s Director of the Year, is. The director of both “Kung Fu Panda 2” and its third installment, Jennifer has successfully created blockbuster hits, breaking boundaries in the process.

The BMW Ultimate Drive award is given to individuals who present an endless motivation in their career. Brian Tee, who has has played everything from turtle nemesis to drifting king and, more currently, Chicago doctor, has proved his “ultimate drive.” But rather than focus on his own motivation, Brian took the opportunity to motivate everyone else. “Be loud, be proud, be that unstoppable collective force that will not be ignored,” he said. “Now is the time, it’s our time. Let’s continue to rise together.”

Actor of the Year — Ken Jeong

Presented by his on-screen family from “Dr. Ken,” Ken Jeong took home Actor of the Year. As expected, his speech was full of laughs, but Jeong ended up echoing what seemed to be the theme of the night’s speeches: supporting one another. “It is a very scary climate that we live in, which makes nights like Unforgettable even more important to exist,” Jeong said. He added that “It’s not about the awards — I just want to work.”

Steve Aoki wasn’t present to receive his award for Music Vanguard, but he did leave some words for the night’s guests. “All the Asian Americans out there doing amazing work, keep going,” he said. “All the young and inspired kids, you can make it happen. You can do it, just follow your passion. Don’t let anyone tell you otherwise, and if someone does, find a new way.”

Wesley Chan and Philip Wang accepted the award for Digital Influencer on behalf of their team at Wong Fu Productions. Wong Fu has become one of the most recognizable brands on the internet, with millions of followers around the globe. Noting the growing role of Asian Americans in the entertainment industry, the guys asked, “Why are we not doing more together?”

“We want to work together,” they said. “The line between traditional media and new media is quickly blurring.”

Don’t forget to order your FREE copy of the 2016 Kore Annual Issue, featuring all our award recipients: https://charactermedia.com/subscribe 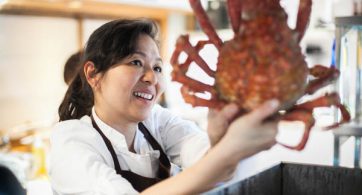 It’s been five years since Niki Nakayama launched her kaiseki revolution with n/naka, the West Los Angeles-based restaurant that not only shook up Southern California’s growing culinary scene, but […]