With Asian Pacific American Heritage Month underway, film festivals centered on Asian American and Pacific Islander-created content are in full swing. But have you ever thought about how all that content gets made?

These six crowdfunding campaigns from independent creators are here to tell our stories from the ground up. Between a short film chronicling a beyond-the-grave love story and a documentary following a Cambodian cyclist, there’s something on this list for everyone to enjoy. However, these projects all rely upon donations (or a share on social media platforms) to reach the screen.

Read on to learn more about these six projects and how you can help support AAPI storytelling. Some of these campaigns close soon, so make sure to share and get those donations in as soon as possible!

Directed by Kyoto, Japan-born filmmaker Eiko Nijo, “The Woman in Yellow” might not be the Asian American ghost story you’d expect. The short film will follow a woman who gets a chance encounter with her parents—decades after their deaths. As her parents offer much-needed guidance, she’s able to find a sense of closure in the sudden meeting.

When it comes to Asian American families, the pressure to succeed can be… intense. Actor and filmmaker Timothy Krabill aims to bring some humor to the experience in this potential TV pilot, which will share Krabill’s semi-autobiographical story of growing up half-Korean in the Pacific Northwest during the ‘80s and ‘90s.

“Champion” comes from the mind of Kimberly Han, programming executive at NBCUniversal. The short film will follow a young Korean American girl who dreams of leaving Los Angeles and returning to her hometown of Seoul, South Korea, where her father has remained to work. Han drew inspiration for the piece from her own “goose family,” and wants to help tell stories about the immigrant experience within the AAPI diaspora.

Paging all fans of hot doctor characters: this one’s for you. In “Queerfully Departed,” Mimi Pascual passes away during a routine medical procedure, only to learn her soulmate is none other than the doctor responsible for her untimely demise. The short will also mark the seventh collaboration between queer filmmakers Mara De La Rosa and Trent Nakamura.

This feature-length documentary, focused on the story of Cambodian American competitive cyclist Johnny Phan, is in the first stage of its fundraising campaign. “Chasing Cambodia” will follow Phan on his journey to the 2023 Southeast Asian Games, an Olympic-level competition slated to take place next May in Hoa Binh, Vietnam. 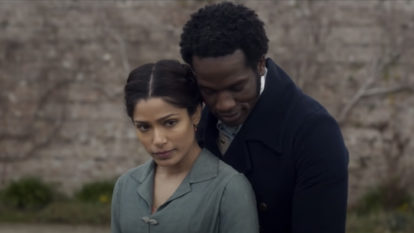