Happy Father’s Day from all of us at Character Media!

We can’t buy a stylish watch or tie for the Asian TV dads that helped raise us. Although these characters are fictional, the life lessons they’ve taught us are not. Here’s our list of the top seven Asian dads who showed us some paternal love through the TV screen.

“All-American Girl” was rife with stereotypical portrayals, but it was also the first Asian American show on air. Without Benny Kim’s (Clyde Kasatsu) calming presence, his daughter Margaret (Margaret Cho) and his wife Katherine (Jodi Long) surely would have torn each other apart by the second episode. He’s strict but fair, and provided the understanding shoulder his daughter needed.

A full-time gastroenterologist, Dr. Shoukath Ansari only accepted the role of Ramesh Shah to spend more time with his son, comedian Aziz Ansari. To everyone’s surprise, Papa Ansari stole the show. That’s because Shoukath Ansari isn’t playing the quintessential Asian American dad—he is the quintessential Asian American dad. His constant mishaps with technology (someone please fix his iPad) and his awkward interactions with his son, Dev, tug at your heartstrings in a way that will make you want to give your own dad a big bear hug.

Sunny (Daniel Wu) might be the most ruthless killer in the Badlands, but he’s also a great dad. He gives up his comfy gig as a regent (a feudalistic general) and treks across a war-torn hellscape in order to cure his son’s mysterious curse. Slicing bad guys in half is his way of telling his kid “I love you.”

“Agents of S.H.I.E.L.D.” has some seriously twisted parents, including Quake’s (Chloe Bennet) deranged father Calvin Zabo (Kyle MacLachlan) and genocidal mother Jiaying (Dichen Lachman). Luckily for agent Melinda May (Ming-Na Wen), her father William (James Hong) is an absolute sweetheart. Although he’s demanding of his daughter, William helps her cope with PTSD and gets her back out there fighting bad guys.

5. Kahn Souphanousinphone (“King of the Hill“)

While Kahn may be a lousy neighbor, he’s a great dad. You can’t blame him for wanting the best for his daughter, Connie aka Kahn Jr. Plus, he’s a master of the “dad joke.” He has a custom license plate that says “King Kahn” and rides a speed boat named “Laotian in Motion.”

The America-obsessed Louis Huang (Randall Park) is one of the best dads on television right now. In many ways, Huang is the Asian American Uncle Phil. He’s just so optimistic! Sure he plugs his restaurant during some inappropriate times and is an incompetent parent sometimes (and subsequently gets chewed out by his wife, Jessica), but Louis is trying his best as a father.

Feel like crying? Watch “Arnold’s Christmas.” Mr. Hyunh is a Vietnamese refugee who hasn’t seen his daughter, Mai, in 20 years, but holds onto the hopes of one day being reunited with her. Regarded as one of the most heartwarming moments in television history, Mai shows up at Mr. Hyunh’s door on Christmas Day. Let the waterworks commence. 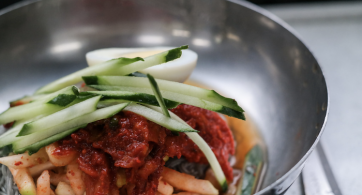 Udon and ramen, curry, K-BBQ—these might be our staples year-round, but now that summer has arrived in full force, it’s time to reach for the food that will cool […]