Ever since breakout standup comedian Ali Wong hinted at creating a romantic comedy with “Fresh Off The Boat” actor Randall Park—their version of “When Harry Met Sally”—the internet has been thirsting for their collaboration. Finally, after two and a half years, America got what it was waiting for: “Always Be My Maybe.”

The rom-com stars Wong and Park as childhood best friends from San Francisco who reconnect after 16 years of not speaking to each other. While Sasha Tran (Wong) is a celebrity chef, Marcus Kim (Park) works for his father’s heating and air company and performs with his old high school band in his free time. Sasha and Marcus’ spark-filled, hilarious romance has given us exactly what we needed: an Asian American rom-com.

Here are our seven favorite lovey dovey moments from “Always Be My Maybe:”

Dim sum is one of the best meals in Asian cuisine. But we all know we could get some better service and some free food if we could just speak Cantonese, as Sasha soon learns. Hands off of those shumai!

There’s no better way to introduce Sasha’s new man, Keanu Reeves, besides playing “Sail” by AWOLNATION as Marcus and Jenny watch open-mouthed. This scene even inspired a dedicated Twitter parody account. Those back-and-forth, PDA-filled exchanges between Sasha and Keanu really make you wonder what kind of freaky things they got up to in the bedroom, huh?

You best believe Randall Park punched Keanu Reeves, and it was better than any scene you could see in “Speed.” Casting Reeves as the a-hole love interest in your rom-com movie is one thing, but writing your character to punch Reeves is a whole other thing.

While it was painful to watch Marcus realize that everybody else has moved on from his mom’s death except him, you can’t help but appreciate the character development that’s happening here.

Sure, the scene is a little cheesy, but after all they’ve been through, this scene is heartmelting. He even made “I want to have a lot of sex with you” sound cute.

6. “It’s gonna be hard to give you an unbiased Yelp review.”

Marcus is right—Sasha’s speech was better. And so was the reason behind her New York restaurant. We’re totally not crying right now. Someone must have cut some onions for kimchi.

We can’t do this movie justice without mentioning the hilarious music written by Park. Even though Hello Peril’s popularity might not ever reach beyond San Francisco’s Chinatown (and Sasha), we’re big fans. You can check out all of Hello Peril’s songs on Spotify. 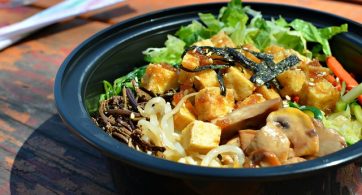 Let’s be honest, vegan food is often criticized for being bland and boring—picture lifeless plates of pale, firm tofu served with flavorless steamed vegetables. These assumptions are completely untrue, […]