Happy Valentine’s Day! After the dinner outings and chocolate heart exchanges are done, why not end the holiday by lazing on the couch with a good movie?

Whether you’re celebrating a long-term relationship, going on a first date or wallowing alone in junk food and ice cream, these eight animated movies from API creators are sure to keep you and your date (or you and yourself) entertained throughout the night. Get ready to be transported into  worlds where time travel is possible and cats can talk, or if that’s not your thing, choose one that’s about everyday life—with some twists, of course. Read on to find out which movies you should queue up to cap off your perfect Valentine’s Day!

A quieter release amid the legendary films from Studio Ghibli, this coming-of-age story is in many ways poignant, but stays lighthearted, too. It follows 14-year-old Shizuku Tsukishima (Yōko Honna) and her newfound friend, Seiji Amasawa (Issey Takahashi), through their turbulent year before high school. As Shizuku discovers her love for writing and Seiji works toward his dream of being a master violin-maker, their two paths continuously intersect throughout the movie in typical will-they-won’t-they fashion. This film isn’t necessarily sad, and it’s also not the usual fantasy genre of most Studio Ghibli films, but still—you’ll need to ready your tissues for the power of adolescent nostalgia.

Time traveling, tragedy and romance come together in Mamoru Hosoda’s “The Girl Who Leapt Through Time,” which follows the story of 17-year-old Makoto Konno (Riisa Naka) and her puzzling time-jumping powers. She first uses her abilities for trivial matters like acing tests or getting to class on time, but quickly realizes she’s wasting her time-jumps when tragedy strikes. Full of twists, turns and bittersweet moments, this film is perfect for those who love love stories that keep you in suspense until the very last second.

Arguably the only Hayao Miyazaki movie that truly focuses on a romance, “Howl’s Moving Castle” is the perfect feel-good watch for a night in. Loosely based on a British novel of the same name, the film sees young protagonist Sophie (Chieko Baishō) trying to break a curse that makes her appear as a grandmother. Along the way, she finds herself a guest in wizard Howl’s (Takuya Kimura) moving castle, as a violent battle between her nation and another kingdom rages on. The story explores themes of found family, anti-war sentiment and, of course, the power of love. “Howl’s Moving Castle” might be the best pick on this list for those who want the perfect balance of both romance and adventure.

Switching gears, the principal love story in Disney’s “Moana” focuses on a girl and her passion for exploration. Highlighting Pacific Islander and specifically Polynesian culture, this story follows chief-to-be Moana (Auli’i Cravalho) and the demigod Maui (Dwayne Johnson) in their search for island goddess Te Fiti’s heart on the seas of the south Pacific. There is no romance, but other forms of love are still abundant throughout the film. The most kid-friendly option on the list, “Moana” is ideal if you’re having a family night this Valentine’s Day, or if you and your partner want to sing along to one of Disney’s best soundtracks.

Based on a shōjo manga of the same name, “Hotarubi no Mori e,” or “Into the Forest of Fireflies’ Light,” is another wistful animated love story, incorporating elements of Japanese folklore. Protagonist Hotaru Takegawa (Ayane Sakura) meets yōkai Gin (Koki Uchiyama) in a forest when Hotaru is 6 years old, after which she promises to come visit each summer holiday. Both tragic and full of a sense of wonder, the story follows Hotaru and Gin through these happy summers together, all the while showing how the two are tempting fate. If you and your date are both on board for a good cry, this is the movie for you.

Makoto Shinkai’s “Your Name,” or “Kimi no Na wa,” made waves back when it was released in 2016, quickly landing in the roster of anime classics and becoming the third highest-grossing anime film ever. Focusing on the “Freaky Friday”-esque, body-swapping love story between Mitsuha Miyamizu (Mone Kamishiraishi) and Taki Tachibana (Ryūnosuke Kamiki), two teens who are physically miles and miles apart, the film explores how destiny can eclipse proximity, or lack thereof. Will these two finally find one another in the end? You’ll have to watch and see.

Another feel-good tearjerker for kid (or adult) audiences, “Over the Moon” boasts a fabulous original soundtrack and a star-studded cast, with Ken Jeong, Phillipa Soo and John Cho in leading roles. Join protagonist Fei Fei (Cathy Ang) on her quest to the literal moon to honor the memory of her late mother and prove to her father that the ancient Chinese tale of Chang’e is real.

Life isn’t easy for a witch! Miyazaki’s classic “Kiki’s Delivery Service” follows 13-year-old witch Kiki (Minami Takayama) as she moves away from her childhood home to a bustling port city. Like “Moana,” this is a film in which the primary love story is one of self-confidence and self-love, though Kiki’s friend Tombo (Kappei Yamaguchi) does add some romantic levity to the movie. If you, your partner or your family want to end Valentine’s Day with an inspiring romp through Kiki’s life in Koriko, this one’s for you. 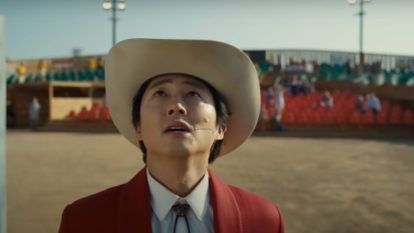 Watch Keke Palmer, Daniel Kaluuya and Steven Yeun in the first trailer for the summer 2022 release.