The Unforgettable Gala, the longest-running awards show for Asian Americans in entertainment, was created to celebrate Asian American trailblazers and their achievements in TV, film, lifestyle, pop culture, and social justice. This year marks the first year that the awards have changed – creating gender-neutral categories for its honorees.

This year has seen an increase in Asian American representation in Hollywood. With groundbreaking films and television series like “Crazy Rich Asians,” “Searching,” “To All the Boys I’ve Loved Before,” BBC America’s “Killing Eve” and NBC’s “The Good Place,” Asians are finally getting their time in the spotlight.

Chu, who is having a great year with a wedding, a baby, and a summer hit film in “Crazy Rich Asians” — just nominated for two Golden Globes, including for Best Movie – Musical or Comedy — was nothing but grateful for the Asian American community, whom he credited for coming together to push for his film.

“We made a little movie this year and we made a big movement,” Chu said during his speech. “When I say ‘we,’ I mean we, in this room, everyone in this room. Look around. Look how good people look. Look how talented we are. Look at our stars. Look how they shine for you and everything you do. Look at our pioneers, our troublemakers, our founders, our protesters, our poets, our community. I am proud to say the state of our union is strong and getting stronger. Because this movement is making waves. Shaking plates. Creating new lands with mountains higher and more glorious than I could ever imagine as a kid. And, it’s not someone else doing it. It’s us. We’re doing it. We are the ones we’ve been waiting for.

“I’ve shed a lot of tears the last six months of my life and said a lot of thank you’s, but that is not enough. This community has paved the way and shook me when I needed to be shaken. Truly shaken. And whispered to me that you would be there if we built it. And you were in spades and brought your parents, grandparents and friends and even bought out total theaters to bring strangers. It’s changed things. It’s pushed things. It pushed me and changed me. Thank you, not for this award, but for my life back. For truly experiencing and understanding what pride means for the first time in my life. Thank you for showing me that community is power and that we are powerful. We don’t need to ask for permission ever again. I didn’t do that. Our movie didn’t do that. Our movie is the result of you in this room.”

In a video speech, Oh said she’d like to “recognize the many people in this room who have worked tirelessly to confront the many challenges of this industry.” Earlier this year, she became the first Asian woman to ever receive an Emmy nomination in a leading acting category. “I thank those who’ve come before and rejoice in the new wave that is here and that is coming. I encourage us all to continue to support each other in the effort to not only be a part of, but to be the creators of this culture — our culture.”

And Cho, who was recognized in the film category for his role as a desperate father looking for his missing daughter in the mystery thriller “Searching,” was presented the award by his “Searching” co-star Debra Messing.

“I was really unexpectedly moved because I was watching an entire Asian American family,” Cho said. “Film is a cultural mirror and I think I was looking at that mirror and seeing an incomplete image of myself. It wasn’t until I saw this image of a whole family that I realized how fractured my self-identity was onscreen. … It’s really this idea of us moving from an individual identity which we all have been. Ben [Baller], I hear you. Jon [M. Chu], I hear you. We’ve all been here being the only Asians moving forward. What’s great is about this room is that we’re here saying ‘us.’ We’re developing, I think, a more collective identity. I’m really glad of it and I think it will produce more creative content and, also, more political power.”

The night’s award recipients were a group of dreamers. Cassey Ho, creator of Blogilates, the No. 1 female fitness channel on YouTube with over 500 million views and four million subscribers, was awarded the Digital Influencer Award for her work to change lives through fitness and a positive lifestyle. Of course, she did not get there overnight. Ho shared that she studied pre-med initial to appease her family obligations but was not truly happy. She wanted to design and be creative, so she dropped out of her biology and chemistry courses to pursue her dream.

Tan France, one-fifth of the Fab Five team of Netflix’s “Queer Eye,” was honored with the Changemaker Award for his work as fashion guru on the hit series. Born in the U.K. to Pakistani parents, France grew up in a very strict Asian household, but knew he had to create his own path to be, in his words, “gay and fabulous.”

France said he knew the responsibility he had as a gay South Asian man in the media. “I get to now represent like I’ve never seen representation before. Gay Pakistanis, or gay South Asians, that is something you never [really see],” he said. “You don’t really see us out there. It’s something that we used to be afraid of. I always thought that I could teach someone that looked like me. I wish I saw another gay South Asian guy who wasn’t just an actor, who wasn’t just a part being played. Someone truly authentic. When I was offered this job, I initially I didn’t think I wanted it, but my beautiful husband convinced me to take this. He said, ‘You now get to be that person you desperately wanted to look up to as a child.’ So, I’m so darn proud to be on ‘Queer Eye.’ I get to represent, hopefully in a positive way, South Asians, and I hope this paves the way for so many more of us because there are so many stories that need to be told. I’m lucky to be one of the first ones in my community to do so.”

Just as France made a name for himself in fashion and pop culture, “Jeweler to the Stars” Ben Baller changed the game in youth culture and American lifestyle. Baller was awarded the Culture – Lifestyle award for his iconic looks and creations with his brand IF & Co. Jewelry, which have been worn by stars like Drake and Tyler the Creator.

Baller spoke about his life growing up as the only Asian in the game, whether it was as the first Asian basketball and football player at University of California, Berkeley or in the entertainment industry. He’s now enjoying the changing tide for Asians. “This award means so much to me,” Baller said. “More than you know. To finally be recognized by my people, when nobody was putting it down on the highest level. It’s way cooler now to not be the only Asian doing it. I feel so much stronger and even more confident with all of you here with me.”

The cast of “Joy Luck Club” presented the Vanguard Award to the cast and crew of “Crazy Rich Asians.” ( (Sthanlee Mirador/Kore Asian Media)

Civil rights activist and Nobel Peace Prize nominee Amanda Nguyen received the Culture – Social Justice Award for her work with Rise, a civil rights organization working with state legislatures and Congress to implement a sexual assault survivors’ bill of rights. Nguyen refused to “become invisible” after her assault and led the charge for a new law that protects the right to have the evidence of a rape kit preserved without charge for the duration of the statute of limitations.

“So often, I am still the only Asian American in these rooms negotiating for these rights,” Nguyen said in a video speech. “One of the most meaningful things have been being able to receive letters from other Asian American women who write about what representation means. So, this award really is for them. And, for all the nerds who are like me. The Asian American kids. I really want you to know, you are loved. You belong in this country. You can change the world and you can rewrite the law too. Take it from someone who already has. And, when you do, I, and the rest of the community, will be there to uplift you as you rise.”

The final award of the night was the Vanguard Award, which was presented to “Crazy Rich Asians,” the first studio film in a quarter century, since “The Joy Luck Club,” to feature an all-Westernized Asian cast. To honor “Crazy Rich Asians,” Unforgettable brought “The Joy Luck Club” executive producer Janet Yang and actresses Ming-Na Wen and Tamlyn Tomita to present the award.

“We are really in a great place right now,” Wen, who currently stars in ABC’s “Agents of S.H.I.E.L.D.,” said. “We have come a long way and it’s because of this one extremely successful and very special film. Last August, ‘Crazy Rich Asians’ proved yet again that Asian American stories do resonate across cultures and races.”

Several of the cast and creatives of “Crazy Rich Asians” came on stage together and had the man who started it all, “Crazy Rich Asians” author Kevin Kwan, say a few words. Kwan shared how he initially wrote the story for himself after his father’s passing, and how he showed it to his friend, who told him to take it to a literary agent. After several rejections, Kwan found an agent who wanted to publish it.

“And here we are,” laughed Kwan. “It’s so remarkable. And, the movement that happened has really been because of your support. So thank you so much for being those outliers and those ambassadors who have gone out there and amplify the message and really been the soldiers of the movement. We are all so grateful. This is really just the beginning of our fight. Because, if you look at it, one movie every 25 years is just not f-cking enough.”

Kore Asian Media Publisher James Ryu also had a few words to share about the film, and about the changing tide of Asian American representation in television and movies. “‘Crazy Rich Asians’ transformed Hollywood,” Ryu said. “And, even better, Asians have seized the media our own way by sharing our stories, not just on TV and movies, but on social media, web series and Instagram stories. Now, who knows what we’ll bring out next year?”

In between all the speeches, talent was all around unforgettable. Asian Canadian beatboxing champion KRNFX performed with singers Megan Lee and Lydia Paek. This year’s “World of Dance” champions, The Lab, gave a high-energy performance with their winning dance moves. Cellist Tina Guo, best known as the electric cello soloist behind the theme for “Wonder Woman” with Hans Zimmer, provided an electrifying performance. Hill gave two powerhouse performances showcasing her soulful voice. Jazz funk group Philthy Funk closed the night with everybody grooving to the beat. 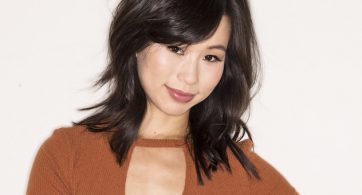 Fans of wry, British comedy are in for treat. “The Wrong Mans,” which originally aired in the U.K. on the BBC and in the U.S. through Hulu, will be […]