Pre-award season is now upon us.

Next year’s 25th annual Screen Actors Guild Awards promises to bring a little something different to the table this time. And it’s not just because Awkwafina and Laverne Cox announced the nominees live from the Pacific Design Center, but about who was on that list — in 2018, the SAG didn’t nominate any Asian American actors. This year, the roster is studded with Asian American talent.

Sandra Oh is up for Outstanding Performance by a Female Actor in a Drama Series for her role as Eve Polastri on BBC America’s “Killing Eve.”

Darren Criss, who played serial killer Andrew Cunanan in “The Assassination of Gianni Versace: American Crime Story,” is up for Outstanding Performance by a Male Actor in a Miniseries or Television Movie Award.

For Outstanding Performance by an Ensemble in a Comedy Series, Sunita Mani and Ellen Wong are up for nomination for their roles as Arthie Premkumar and Jenny Chae, respectively, in Netflix’s “GLOW.”

In the same category, the cast of Netflix’s “The Kominsky Method” is also up for nomination. Melissa Tang is on the list for her role as Margaret. 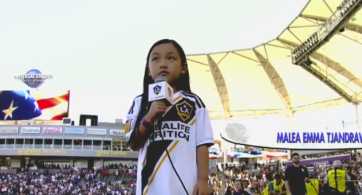 Though many young kids aspire to be doctor-ballerina-astronauts when they grow up, Malea Emma Tjandrawidjaja knows exactly what she wants to be: a singer. And, she’s already doing it! […]