History was made Sunday night at the 76th Golden Globes, as Sandra Oh became the first Asian woman to win multiple Golden Globes for her acclaimed turn in “Killing Eve,” and as Darren Criss became the first Filipino actor, and the third youngest in the category, to win a Golden Globe when he accepted the Best Actor in a Limited Series award for “The Assassination of Gianni Versace: American Crime Story.”

The night arguably belonged to Oh, who co-hosted with Andy Samberg — together, they tried to kill their audience with wholesome kindness — and picked up the trophy for Best Actress in a TV Drama, becoming the first Asian woman to win in the category in 38 years.

“I said yes to the fear of being on this stage tonight, because I wanted to be here, to look out into this audience and witness this moment of change,” Oh said in an emotional closing to the monologue. “I’m not fooling myself. Next year it could be different. It probably will be. But right now this moment is real. Trust me, it’s real. Because I see you, and I see you, all these faces of change. And now, so will everyone else.”

Later, during her award acceptance speech, she acknowledged her parents, bowing to them in Korean with an “I love you.”

Criss, who won his first Emmy for his leading role as the serial killer Andrew Cunanan in “Versace” last year, also gave a shout-out to his mother during his speech. “As we’ve seen, it’s been a marvelous year for representation in Hollywood,” he said. “I’m so enormously proud to be a teeny tiny part of that as the son of a firecracker Filipina woman from Cebu that dreamed of coming to this country and getting to be invited to cool parties like this.”

I am so incredibly happy for  @IamSandraOh tonight. Well-deserved. Overdue. She is always best actress, y’all.  Always.

darren criss ending his globes speech with “this is totally awesome!” just made my 12-year old heart palpitate

dang, sandra oh bowed to her parents from the stage in gratitude. she is the only good enough asian daughter now https://t.co/9jGa2Li2g3

Every Filipino watching the #GoldenGlobes when Darren Criss mentions his Filipina mother! pic.twitter.com/CBmZS7HrFV

sandra oh chilling at an after party in a suit and sneakers after winning her second golden globe and making history as the first asian to win best actress in a drama in 38 years is the most iconic thing i’ve ever seen pic.twitter.com/frXqZakrfl 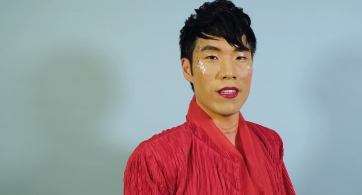 “I can show you the woooorld…”