If Steve Aoki took away one message from the blockbuster success of “Crazy Rich Asians,” it was this: An Asian American moment is finally happening.

“This is a statement. I’m taking the stride from ‘Crazy Rich Asians’ and saying, ‘We’ve gotta keep going with this Asian empowerment,’” Steve Aoki said during a break from the shoot, inside a nightclub in the heart of Los Angeles’ Koreatown. “There’s a testament right now to how Latin music and non-English-based musical genres are No. 1. K-pop is also doing that. It’s the same concept as the four-minute mile — before the guy who broke that record, people thought it was impossible. Once he broke it, everyone started breaking it. What’s happening now is a really amazing time for the non-dominant cultures to really take force.”

“Waste It On Me” is Steve Aoki’s third collaboration with BTS, and the band’s first in-English song. The track appears on his newly released album “Neon Future III,” which also features artists like Kiiara, Blink-182, Lady Antebellum and Lil Yachty.

“[BTS] is just so easy to work with,” Steve Aoki said. “I’ve never had that kind of consistency and flow. There are other artists that have great flow, but it’s something special with BTS.

“You think OK, this is a boy band, so it’s going to be so structured, but then out of the gate they’re like, ‘What’s up!’ They’re just fun guys. Their personalities are so big, bigger than other personalities that I’ve met. That charisma and their genuine nature, it really is one of their best qualities besides obvious things like their dancing, their live shows, their voices, how they all gel and work together—it’s all a big part of their success. I just love their energy—as a producer, when I work with different artists, the energy that we bounce off each other is really what’s gonna create the essence of the music.”

The significance — of an English song produced by a Japanese American, sung by South Korean musicians and released in America hitting No. 1 on music charts — wasn’t lost on Steve Aoki, who felt it was especially important to reach out to a large group of fellow Asian American creatives, and to show that music bridges generations and cultures.

“We’re in a cultural moment beyond music,” he said. “There’s always going to be strife and history and war. We’ve gotta move beyond that. With the new generation, music brings people together. That’s the one common thing we can all agree on.”

Devon Aoki said she’s happy to see her brother at the forefront of the movement. “You know what, usually when [Steve] asks me to do things, I say no,” the actress and model said. “I’m a busy girl! I don’t have time to go to all these parties! But this project, he said, ‘I don’t want you to miss this, Dev.’ It seemed like a perfect moment to do something together. I get to play opposite Ross Butler — he’s a cutie! As a married mother of three, this is a good distraction for one day out of 365, right?”

In the music video, Devon Aoki plays a woman with her boyfriend (Butler) as she is pined after by a nightclub waiter, played by Ken Jeong.

“[Asian Americans] are now doing the things we want to do,” Butler said. The “13 Reasons Why” star is due to appear in next year’s superhero film “Shazam.”  “We’re not being pushed into categories we don’t want to be in,” he said.

Ben Baller, who’s been a friend of Steve and Devon Aoki’s for years, agreed. “I’m proud we’re being represented in something popular and mainstream, and not for being something like martial artists. We’re representing who we actually are.”

“In a way, it’s like speaking back to my 8-year-old self saying, ‘Hey, we have power too,’” Steve Aoki said.

Check out our shots from behind the scenes at the shoot:

Left to right: Steve Aoki, Ken Jeong and Devon Aoki on the set of “Waste It On Me” music video in Koreatown, Los Angeles. Devon Aoki said: “I’m a proud little sister. I always knew [Steve] was special, but now the world knows it,  too.”

Steve Aoki said Jamie Chung flew into Los Angeles in the middle of shooting in Atlanta, and flew back as soon as the music video shoot wrapped. (Jeff Sanico/KORE) 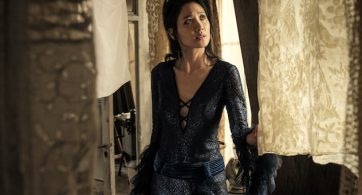 Here’s a story-in-reverse you don’t hear often: Claudia Kim came to Hollywood because it was willing to offer her more diverse roles than she could get in her native […]