Worlds are colliding — the teaser for Steve Aoki’s remix of BTS’ “MIC Drop” has been released, and we can’t get enough.

In the short one-minute teaser video released by BTS’ record label Big Hit Entertainment, we see Aoki DJing as the members of the Korean boy band dance along to Aoki’s heavy beats in a recording studio. Cars are on fire and mics are dropping.

The collaboration also includes hip-hop producer Desiigner. The song is off of BTS’ latest album “Love Yourself: Her,” with the full release of the song and video coming Nov. 24.

In the meantime, keep hitting replay on the teaser for “MIC Drop (Steve Aoki Remix)” below: 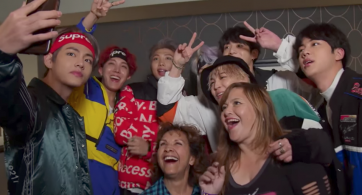 While legions of fangirls are excited that South Korean boy band BTS has infiltrated the U.S. mainstream, Jimmy Kimmel’s just out to tease them all. Ahead of their performance […]