Netflix’s elaborate original series Marco Polo was met with some criticism from the Asian American community for being an outsider’s fetishization of the East. But actress Joan Chen urges skeptics to look at it differently. “It’s such a great opportunity for so many Asian actors,” she says. Other than the lead, Lorenzo Richelmy as Marco Polo, almost the entire cast is Asian or Asian American, with Benedict Wong as Kublai Khan, Rick Yune as the leader of the Golden Horde, Zhu Zhu as the Blue Princess, Chin Han as the villainous chancellor, Olivia Cheng as a suffering concubine with some tricks up her sleeve, and Claudia Kim (who was just named the first Asian face of cosmetics brand Bobbi Brown and can be seen in Avengers: Age of Ultron this May) as the warrior Khutulun. “I see how excited these kids are to work on this grand production,” says Chen. “They have dialect coaches and personal trainers, and this series gives them a year to work on their craft and express their talents. I think of it as completely positive.”

Chen has been acting since she was teenager in China, where she became a household name and was dubbed the “Elizabeth Taylor of China” for her role in 1979’s Little
Flower. She was “discovered” twice. Legend has it that Madame Mao discovered her at a school rifle range, impressed by her skilled marksmanship. She was soon chosen for the Actors’ Training Program by the Shanghai Film Studio. At 20, she decided to move to the United States to study filmmaking. Though she had no connections in Hollywood, she was discovered again by legendary producer Dino De Laurentiis, who honked at her in a parking lot. His line was: “Did you know that Lana Turner was discovered in a drug store?”

He managed to convince her to take his card, and her managers couldn’t believe she had met the Dino De Laurentiis. She soon landed her first Hollywood role in 1986’s Tai-Pan. In the last three decades, she’s been juggling films in both China and the U.S., from the Oscar-winning Bernardo Bertolucci film The Last Emperor to the American cult TV series Twin Peaks, to big Asian productions like Ang Lee’s Lust, Caution and smaller Asian American indies like Saving Face. She’s also a writer and director in her own right, directing the feature films Xiu Xiu: The Sent Down Girl and Autumn in New York.

In Marco Polo, Chen plays Empress Chabi, Kublai Khan’s first and favorite wife. Though the creators researched the history for their fantastical story, there wasn’t much historical information on Empress Chabi to go on. So they worked with Chen to develop a more complex character who drives the plot and would be more fulfilling for the veteran actress to play.

The grand production, overseen by The Weinstein Company and reported to be one of the most expensive TV shows ever made, was shot mostly in Malaysia. “The costumes are made of real silk and ornaments,” adds Chen. “They’re so heavy that you know they didn’t spare a cent to make every detail luxurious.”

She also loved going to work and seeing all the stunt tents, where actors and martial arts performers trained every day. Though Empress Chabi doesn’t have a lot of action, Chen was able to learn some archery for some of her scenes. This brought her back to her days at her high school rifle range.

“Even though they’re two different sports, there are some principles that are the same,” says Chen. “The way you aim, the breathing techniques, the way you use your cheek and how you use your body. I took it up pretty fast. But obviously, I could take a lifetime to learn it.”

Though she knows that the show is romanticized and operatic, she hopes viewers of Marco Polo enjoy it for that very reason. “It’s a visual feast,” she says. “In the beginning, you have to set up all these characters and the historical background, but by episode 10, it’s really powerful. It’s cooking. It’s hot.”

All episodes of Marco Polo are currently available on Netflix, and the series has been renewed for a second season

Photo courtesy of Netflix
This story was originally published in our Spring 2015 issue. Get your copy here. 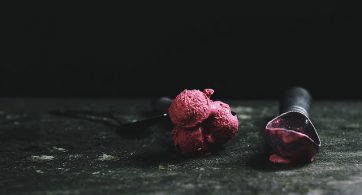 When it comes to ice cream cravings, sometimes the taste of plain ol’ vanilla or chocolate doesn’t cut it. At the same time, you don’t want to consume […]