Somewhere in a small church in Capoliveri, Italy, a woman dances away in front of the altar in a delicate, white, sheer shirt. That woman, is none other than the voice behind the indie-famous (and fabulous) band Blonde Redhead, Kazu Makino.

Today, the songstress is releasing her first solo album, “Adult Baby.” Not only that, but she also just released the music video for “Come Behind Me, So Good!” The visual is one part of Makino’s accompanying narrative film, also titled “Adult Baby.” Shot by the award-winning director Eva Michon in just under three hours, the video not only features Makino, but members of the local village mouthing along to her haunting vocals. The music video provides just a small taste of what’s to come in her film, which takes place entirely on the Italian island of Elba—the isle where Napoleon Bonaparte was exiled in 1814. The film’s release date has yet to be announced. 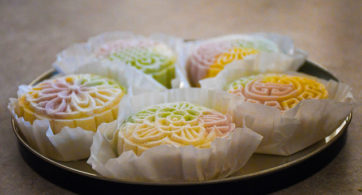 The Mid-Autumn Festival marks the end of the autumn harvest in East Asia, and always falls on the night of a full moon in the eighth month of the […]