Join us for a live chat with Justin Chon at 9 p.m. PST on Tuesday, Nov. 17. He’ll talk about New Moon and even sing us a couple songs. You won’t want to miss it.

When Justin Chon isn’t shooting the Twilight series in Vancouver, he’s splitting his time between Los Angeles and Irvine, living the single life and memorizing lines as one of the only young Korean actors in Hollywood (getting work, that is). The 28-year-old USC grad, most known for his role as the Twilight series’ Eric Yorkie, a non-bloodsucking classmate of the main character, Bella Swan, also appeared in Nickelodeon’s Just Jordon and the film Crossing Over, starring Harrison Ford. As America anticipates this month’s release of The Twilight Saga: New Moon, which opens on the 20th, Chon chats with KoreAm about the sequel, die-hard fans, and why he’s so happy to be working in America.

How was the set for New Moon different from the first film’s?
[New Moon’s director] Chris Weitz is very calm; his sets are quiet. Catherine Hardwicke, [who directed the first film], her sets are more of a circus; everyone’s screaming and running around. Catherine likes to be in it. Chris just slowly walks up to you and says, “Yeah, I like that.”

Does the cast get along?
Yeah, it’s fun. Everyone is civil and friends. It’s like college.

Are the fans truly obsessed?
Yes. If you go out with Robert [Pattinson] or Kristen [Stewart], it’s a done deal; you’re not going to be eating dinner.

Do girls run up to you and scream your character’s name?
They do, actually. I was just in Busan for the film festival, and on the red carpet, all these girls were screaming, “ERIC! ERIC!” And I kept screaming back, “My name is JUSTIN! No, JUSTIN.”

How was the Busan International Film Festival?
They invited me and Jamie Chung as “special guests.” But there was nothing special about it. They were so disorganized. The first day, I was told I had to come to [this event]. They didn’t tell me what the hell was going on. I had to put on these white gloves, push this button, and all of a sudden, fireworks came up and I almost fell on my ass. To this day, I don’t know what that was.

I’m sure the parties made it worth it!
We partied. You just eat a bunch of seafood and drink a sh-tload of soju. There was this one club, with techno music and all these lasers. And you’re talking to someone and it’s like, ‘Hey, there’s a green beam on your face.’

How’s the club scene in Korea?
Going out a lot was fun when I was 19 or 20. Now that I’m older, the girls are really young. It’s like, you’re not even a human being. You’re a piece of flesh.

Career-wise, what’s in store for the future?
I finished the third Twilight, meaning I’ve played the same character for two-and-a-half years. It’s a weight off my shoulders. I was anti-TV after I got off Nickelodeon…but there are more roles in television now. Cool stuff, like John Cho in FlashForward and Tim Kang in The Mentalist. I’m ready to explore and really expand my horizons. 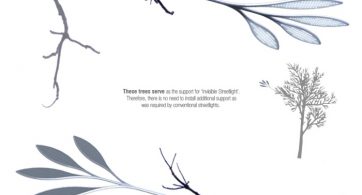 Wouldn’t it be nice if dark streets were illuminated by these beautiful, photosynthetic leaves? That’s the concept behind Jongoh Lee’s “invisible streetlight.” The flexible body of the solar-powered light […]