The wait is almost over! Warner Brothers had been teasing a comedy to be released Aug. 17, and it has now revealed that the date was set for Jon M. Chu’s “Crazy Rich Asians,” according to Deadline.

Based on the first book of Kevin Kwan’s trilogy, “Crazy Rich Asians” is about American-born Chinese Rachel who accompanies her boyfriend to his hometown in Singapore to attend a relative’s wedding. She not only discovers that her boyfriend comes from extreme wealth, but that his family is wealthy in drama, as well.

Chu’s adaptation made headlines last year when the director announced his intention to stay true to the source material by casting only actors of Asian descent. ABC’s “Fresh Off the Boat” star Constance Wu and Hollywood newcomer Henry Golding will lead the cast. Michelle Yeoh, Ken Jeong and Gemma Chan also star. 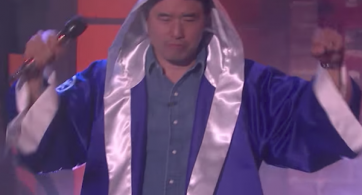 We all know Randall Park as charming TV dad Louis Huang on ABC’s “Fresh Off The Boat,” but did you know that the actor also has a background in […]