In his latest video, Eugene Lee Yang opened up about his identity as a proud gay man through the language of dance and fashion in every color of the rainbow.

Yang, a producer, actor, writer, director and an iconic member of The Try Guys, released a self-directed, written and choreographed coming-out video featuring ODESZA’s “A Moment Apart” and “Intro Instrumental.” “I’m Gay” was published on The Try Guys YouTube channel on June 15 and was later featured on YouTube’s Trending page. Through his poignant choreography, Yang explores themes of growing up Korean American and gay in a strict, unwelcoming environment. The video is broken into six distinct segments—red, orange, yellow, green and purple—signified by Yang’s dramatic wardrobe changes.

Prior to his coming-out video, Eugene avoided explicitly identifying as “gay,” and instead chose to use the umbrella term, “queer.” “‘Gay’ is such a toxic word to some people, and I think that other words like ‘queer’ and ‘LGBT’ mean nothing to some people” he said in the behind-the-scenes video, “Why I’m Coming Out As Gay.”

Eugene says he felt a moral obligation to publicly say his truth and to become the advocate that he never had growing up. “I need to own up to who I am 100% as a person,” he said. “It’s kind of a weird weight on my shoulders because there’s so much more I can do as a person who is LGBT but also specifically gay. There has been a lot of concealing, withholding and editing that I have done to protect myself. It’s not like I’m gonna be a different person the next day. It means that I don’t have to take a red pen through my life, mark out or tear out pages.”

Executive produced by 2ND TRY and co-produced by EVERYBODYNEEDSUS, Yang’s coming out video wasn’t just a monumental creative undertaking, it also has a humanitarian element. Viewers have the option to donate any monetary amount with all proceeds directly benefiting The Trevor Project, the leading national organization providing crisis and suicide prevention services intervention to LGBTQ youth. Yang’s video has already raised over $83,000 for The Trevor Project. 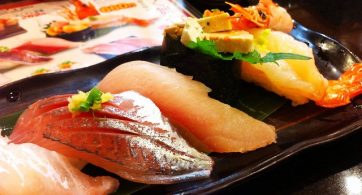 If this holiday caught you by surprise, just roll with it! Sushi is considered one of the most luxurious (and pricey) Asian dishes, but getting a sushi meal shouldn’t […]