The 2022 Asian Comedy Fest is coming to you live and in-person from New York City (and online) for their third annual edition.

Running from May 6 to May 7, the event is currently the biggest national comedy festival that showcases AAPI comedians from all over the United States. Started in 2020 by NBCUniversal’s Ed Pokropski and Yahoo’s Kate Moran, the festival has made it their mission to not only elevate Asian voices but also support AAPI-owned businesses and charities. Last year, ACF continued in a hybrid format amidst the pandemic and gave AAPI creatives a chance to screen their own homemade videos, posted on the short video app Rizzle at the festival to win cash prizes. The event was able to raise $8,000 for Apex For Youth, a charity focusing on underprivileged Asian youths in NYC.

This year, ACF is returning with even more API talent, with performers like Karen Chee (“Late Night with Seth Meyers”), Dylan Adler, Yuhua Hamasaki (“RuPaul’s Drag Race”) and even a live podcast session of “Feeling Asian” with Youngmi Mayer and Brian Park! The festival is also continuing its partnership with Rizzle with a contest for API creatives around the world. The top three winners will receive a cash prize up to $1,000 and their concepts will also be greenlit for a 10-episode series on Rizzle. A portion of the proceeds from this year’s fest will be donated to Heart of Dinner, an organization that aims to combat food insecurity and isolation within NYC’s elderly AAPI community by delivering food along with comforting notes in different languages.

For more information on the multiple API performers at this year’s ACF, and how to score tickets for the event, check out their website and be sure to follow their socials for some joy for your feed! 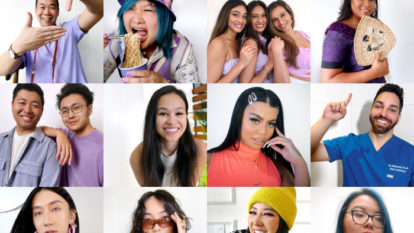 TikTok is celebrating APAHM with a slew of exclusive content, helmed by their very own API trailblazers.