Joseph Lee is famous for two talents. As an actor, the tall and lean thespian, who often sports a bandana knotted around his throat, played John Cho’s brother in the techno-thriller Searching. And as an artist, Lee’s murals, like the one of rapper Dumbfoundead outside of Catalina Liquor at 8th and Catalina streets, are well-known landmarks for the denizens of L.A.’s Koreatown. “A lot of my references come from photos I find on a daily basis, or photos I take within my local neighborhood,” he said. “From there, it’s not about capturing that person specifically on the canvas, but capturing a universal essence of what that person is and what they represent.”

It all started just a few years ago when, on a particularly frustrating day, Lee made the drastic decision to quit his day job in a sushi restaurant, picked up the paint brush and never looked back. “In between acting jobs and auditions, mentally I just needed to be creative instead of waiting at home all the time and moaning over a failed audition or waiting for an audition,” Lee said. “This was the one outlet I had to really keep me busy, and also something that gave me control, which you know acting rarely does provide. It’s just been a very stable route for me.”

It’s particularly surprising for Lee, who never  formally trained in visual art. “My background was in theater and political science,” said Lee,  who studied at Purdue University in Indiana. “Art was not at the forefront at all until I came out here, and I just naturally began meeting a lot of artists and really got inspired by the creative community.”

Lee modeled for the famous photographer Mark Seliger for a Ray-Ban campaign and began producing photorealistic works of his own. “And from there I just gradually played around a lot like a kid in the candy store, grabbing anything I can find,” Lee said. “I use a lot of fabrics, embroideries. I don’t know where this work will take me, but I’m just trying to stay present with my work and seeing where it goes.”

His paintings are often realistic portraits of famous faces or everyday people, but slathered with thick layers of gooey paint or obscured by patches of fabric with bold strokes of color. His art is his way of working through the profound identity crises that come with straddling two oppositional cultures: Korea and the United States. In fact, his latest series, “Identitychrist,” is the result of the personal turmoil he experienced as a performer on the set of a Korean drama called The Miracle We Met. “During that time I kinda had this mini-breakdown while working in Korea, and a lot of it kinda came from having this cultural-personal identity crisis,” Lee said. “Leaving and disrespecting the [Korean] people around me was never an option. Instead a lot of my emotions manifested in not being able to sleep, eat and leave my hotel room.

“I come from Indiana, and so I think, with my childhood growing up, I just dealt with a lot of
insecurity issues and just feeling like I didn’t belong in any one setting,” Lee said. “And so being in Korea and having this romantic idea of the motherland, aside from going there to work, I took this opportunity to really delve into the Korean culture, just to really be a part of it as much as I could. Through that experience, I kind of went back to a lot of those childhood feelings of being out of place, and almost kind of having to confuse who I was to be a part of the culture.” As Lee has proven, home is where the art is. 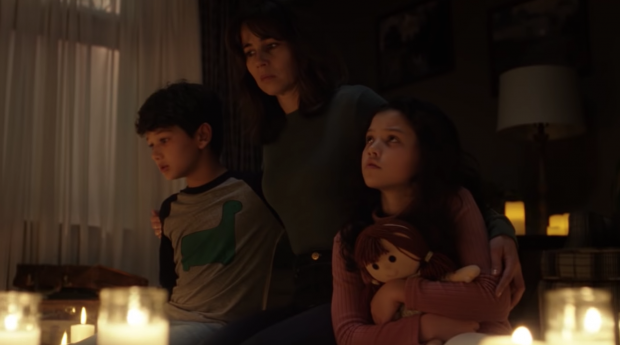 James Wan is back to doing what he does best: scaring everyone silly.