Charles H. Kim would have been proud. The late Korean independence leader and pioneering entrepreneur who started the prosperous Kim Brothers Company in Reedley, Calif., was also respected in his time for his philanthropy. With wealth earned through his agricultural business (famous for cultivating a then-new fruit known as the nectarine), he and his partner Harry Kim never hesitated to donate their money to helping others and supporting causes like music education at their local schools. So, imagine what Charles Kim’s reaction would be if he knew that students from a Los Angeles Koreatown school now bearing his name got a chance to learn from one of the world’s finest musicians at an innovative arts education center.

On April 5, fourth-graders from teacher Susan Kim’s class at Charles H. Kim Elementary School were singled out to take part in a special workshop led by cellist Yo-Yo Ma and ballet star-turned-producer/director Damian Woetzel at Inner-City Arts in Los Angeles.

The students had earlier taken twice-weekly classes in ceramics, dance, drama and music at the campus this past winter, and were invited back by an Inner-City Arts dance instructor who was particularly impressed with the group and their teacher.

Both members of President Obama’s Committee on the Arts and Humanities, Ma and Woetzel, joined by other artists, spent the morning with the students, teaching, performing and answering questions about their respective crafts. Ma also treated the students to a moving string performance of the classical Camille Saint-Saens piece “The Swan,” as L.A. street dancer Charles “Lil’ Buck” Riley danced in a unique style known as jookin’ that left the children spellbound.

Ma is a big fan of Inner-City Arts, an oasis in the Skid Row neighborhood of Los Angeles that tries to provide a bridge between the classroom and studio.

Its approach to arts education has been praised for improving outcomes for youth, especially those at risk of academic failure and with limited English ability. The program fills an important void, as nearly 30 percent of California’s public schools offer no study in any arts discipline.

And Ma’s not the only fan of Inner-City Arts. Daisy Kim, granddaughter of Charles H. Kim, noted that the Charles H. Kim Education Fund that she leads raised the money to send several classrooms to attend the classes at the campus, which she lauded for its stellar instructors and program. Charles H. Kim Elementary, a Title I school, which means a large concentration of the students are from low-income families, is the first public school in the nation to be named after a Korean American.

“He would be happy that we’re trying to do so much to provide for children who wouldn’t otherwise have wonderful opportunities like this,” said Daisy of her grandfather, who died in 1968.

I was excited my class was going to see Christina Pato play bag pipes. She had green highlights in her hair. When we waited in the theatre, we heard Christina’s bag pipes coming toward us, and everyone was quiet. From a distance, it sounds quiet, but when it gets closer, it got loud. Her music sounded very loud like there were speakers everywhere.

I was shocked that she could hold her breath that long. I was amazed because she said that she started playing bag pipes when she was about 4 years old. I was blown away how fast she played her instrument so well. I was glad that Christina Pato got to perform for us.

“Learning the moonwalk from Lil’ Buck”
By Junyoung Chang

The day of our fieldtrip, our class learned and practiced the famous moonwalk from Lil’ Buck. He is a very nice hip-hop dancer and could do anything you ever imagined. His moves were swift and very professional. We separated into two groups, Team A and Team 1, so it’ll be fair. He taught Team A first. He taught them the moonwalk with rolling shoulders and then taught Team 1 (the group I was in) the moonwalk the Michael Jackson way. It was very hard for me. I was barely following his moves. When he taught me his moves, I was so happy. I couldn’t believe I was learning the moonwalk. But sad for me, my body didn’t follow what I said and didn’t work as well as I thought it was going to. It was okay for me though. I could still remember the way and practice more and more until I’m good at it. I still felt nice and went on to the next move he was going to teach us, shuffling.

We went to Inner-City Arts to see some famous musicians and dancers. We were lucky enough to be visited by a famous ballet dancer named Damian Woetzel. His dancing is a type of dance I had never seen before. Damian danced like the flow of a calm and smooth river. He taught us a piece of ballet. The first step is to raise your hand in the air like the sun is in your eyes. Once you do that, you put your hand down to your forehead like you have a headache. As you have your hand on your head, you look to the left. Then, you lower your hand so it is a sash over your heart. He then taught us some ballet poses like first position with your hands and feet. After, you put out one leg and spread your arms. Later, you cross your legs and spread your arms again. That was the small piece of ballet that Damian taught us. I loved this small piece of ballet because it is so interesting. I also love the fact that we got to perform it. I was shy at first, but then I realized how fun ballet and performing can be. I like ballet and would like to try it again. I bet if I practice it for a long time, I will be pretty good. I love the way Damian moved and think he is a great dancer.

We went to Inner-City Arts on April fifth. After warm ups with [dance teacher] Ms. Paula, I saw Yo-Yo Ma through the window. I was so excited. After that I went inside the theater. It was dark and big. After we did more warm ups, Yo-Yo Ma began to practice. When he was done, we took a picture with him. He stood right next to me! When the other schools arrived, Yo-Yo Ma and his partner began to play. The song was called “The Swan.” I felt very excited. The music was so good. When he was done he told us about himself. When we were leaving, I was so happy. The experience of seeing Yo-Yo Ma in person was extraordinary. 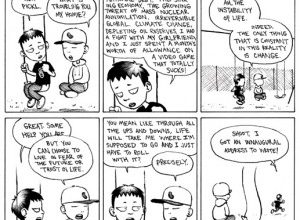