The day, announced in city council chambers by Mayor Eric Garcetti and Councilman David Ryu, kicked off Asian Pacific American Heritage Month, which will see the city recognize and celebrate APAs throughout May with exhibitions, concerts and activities.

As Lucille Soong, who plays Grandma Jenny, put it: “We’ve come a long way. Chinese came to America in the 1800s, a long time ago. Finally, we are being recognized, as ‘Fresh Off The Boat.’ All Asians came over — we’re all fresh off the boat!”

The show is an adaptation of a memoir by chef and writer Eddie Huang, and follows the Taiwanese American Huang family as they move to 1990s-era Orlando to run a steak restaurant. Its debut marked the first Asian American family-centric program to air on a major network in 20 years.

“[Growing up here], I had a loving, sometimes-dysfunctional family and a colorful group of friends,” Park said. “But rarely did I get to see my unique Asian American experience reflected in the movies or on TV. Occasionally a trail would be blazed by someone like Pat Morita or Margaret Cho, amongst others, but the perspectives coming out of Hollywood remained and still remains predominately one-sided, so for me it is an honor that we are being recognized for our show that is helping to change things.”

Mar, whose credits also include executive producing ABC’s Minnie Driver series “Speechless,” is another Los Angeles native who grew up in Chinatown helping his father, who had a bean sprout distribution company, run errands around the city.

Mar’s story echoed Ryu’s. The councilman — the city’s first elected Korean American to sit on the council, only its second of Asian Pacific descent, and APAHM co-chair — said the story of the Huang family was a reflection of his own immigrant parents, and their dedication to the American Dream. “Like Louis and Jessica, my parents worked countless hours and saved money religiously, all for a brighter future for me and my two siblings,” Ryu said. “I am so proud to be here today to celebrate Fresh Off The Boat Day, because I, too, was once fresh off the boat myself. … We need diverse thinkers, leaders and storytellers who understand the unique experiences of our leaders and our communities of tomorrow.”

Yang, the 13-year-old actor who plays oldest son Eddie Huang, called the designation of the day an “extreme honor.” “I think it’s really important that it’s happening here in L.A., because it shows how far Asian Americans have gone from where we started,” Yang said. “I think our show is doing a really good job of putting diversity in our entertainment.”

Wheeler agreed. “Hopefully, ‘Fresh Off The Boat’ can inspire more show and movie creators to include Asian Americans.”

Garcetti and Council President Herb Wesson called to shows like “Fresh Off The Boat” to help spread a message of unity.

“When we watch programs like [this], we find out that we are all the same,” Wesson said. “The only thing that separates us are cultural differences that really should be celebrated.”

“The city is home to Chinatown, Koreatown, Little Tokyo, Little Bangladesh, Filipinotown — we see the diverse reflection not just of Asian Americans, but the entire Pacific region and the Asian continent,” Garcetti said. “We need [‘Fresh Off The Boat’] more than ever. At this moment when people try to pull us apart, this is something that pulls us all together. … This is the face of America.” 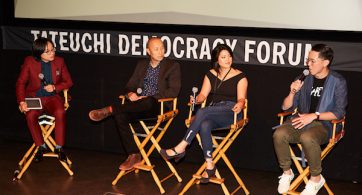 On Friday, the Los Angeles Asian Pacific Film Festival hosted the premiere of the three winning shorts of HBO’s first-ever APA Visionaries competition. The shorts, in their premiere showing, […]