Actors John Cho & Kal Penn landed on the Tonight Show with Jay Leno to promote their upcoming film “A Very Harold & Kumar 3D Christmas“. They start off chatting about their connections with President Obama from working at the White House to being invited there. The duo also talk about their very first press tour and the similarities to their Harold & Kumar characters. Watch a special clip from their movie.

A 49-year-old Glendale man has been arrested on suspicion of stealing the personal information, including Social Security numbers, of more than 90 Korean-Americans, police said.

Dong Ho Han, who is being held in lieu of $4.6-million bail, was arrested early Wednesday on suspicion of identity theft, possessing a forged driver’s license or identification card and possessing pills without a prescription, according to Glendale police reports.

“There is no indication of what he was going to do with them,” Financial Crimes Sgt. Harley Wing told the Glendale News-Press.

Police stopped Han about 2:30 a.m. at Los Olivos Lane and Moore Street for a traffic equipment violation when they discovered he was on probation for forgery in Santa Barbara County, Wing said.

During a search of Han’s car, police found dates of birth and Social Security numbers for more than 90 Koreans, he said.

Police also found prescription pills, including Oxycontin and Methadone, three or four signed blank checks and four passports in his name, but with different dates of birth, Wing said. Han also had $3,200 in cash, Wing added.

On Sept. 28, 2011, a father told Naperville police that his 13-year-old daughter had been sexually abused by her martial arts instructor, Hyungkyu Choi.

Five days earlier, about 2 a.m., the girl told her dad, Choi drove her to one of the YK Martial Arts Studio locations in Naperville, and sexually abused her there.

A doctor interviewed and examined the minor that day, and the minor disclosed to him that she had a relationship with Choi over several months and they had sexual contact twice between July and September.

After meeting with police on Oct. 1, Choi fled the country for South Korea on Oct. 6.

Heads up. Our friend, actress Joy Osmanski, stars in the next FOX animated series Allen Gregory, which premieres this Sunday, October 30 as part of the network’s animation block (right after The Simpsons). Joy supplies the voice of Julie DeLongpre, Allen Gregory’s sister.

A top star and a judge, both middle-aged, have joined hands in Korea and America to overcome the difficulties of being mixed-race. They have spent over 50 years of life in different places but when they meet their faces seem both similar and different. 54-year-old singer In Soon-yi, the child of a Korean mother and a black American father who was serving in the Korean war, and 56-year old Judy Draper, a Korean-American judge, met at a restaurant in Bangbae-dong, Seoul, on the 20th. Their meeting was arranged after the Ministry of Foreign affairs and Trade (외교통상부) brought Draper to Korea on the 17th after she became a well-known Korean-American after being made a circuit judge in St. Louis, Missouri. Judge Draper, who brought her multicultural son with her, came to know In Soon-yi when she learned were both doing similar work at the Pearl S. Buck Foundation Korea (한국펄벅재단) and requested that the Ministry arrange a meeting.

A spokesperson for In Soon-yi said that “as soon as in Soon-yi met Judge Draper they embraced… As mixed-race Koreans they each overcame discrimination and never gave up, working to be treated fairly, and each was touched by that.”

South Korean officials Wednesday remained mum on high-level talks between North Korea and the United States on how to resume nuclear disarmament negotiations but said the communist state had shown seriousness in a recent flurry of diplomacy.

A Seoul official said the government was waiting for a full briefing from Washington before making any comment. But he added on condition of anonymity that in two rounds of contact between the Koreas, running in conjunction with the U.S.-North talks, Pyongyang had been “quite serious.”

The cautious approach echoed that of U.S officials, who after the two-day session in Geneva earlier this week, said talks had been positive, while stamping down hope for an imminent breakthrough. Stephen Bosworth said the sides had narrowed differences on resuming six-party talks but did not elaborate on areas of progress.

Figure skater and Olympic champion Yuna Kim is launching her own ceramic collection, “YUNA,” in collaboration with a Korean ceramic company.

“I wanted to do something with my career that could spread awareness of Korean culture,” said Kim at the YUNA showcase at Shinsegae department store on Thursday. “And I chose the most Korean brand.”

She referred to the porcelain manufacturer Kwangjuyo. The upscale, traditional, handmade pottery-maker is known for its drive to develop and introduce Korean food globally.

Raised in: Born and raised in Seoul, South Korea

Proudest Professional Moment: The Red Snow, a screenplay that I wrote while at Tisch Dramatic Writing Department, won 2003 Hartley-Merrill Award that was announced at Cannes Film Festival; The Chaser, a Korean film, that I co-wrote became a hit in South Korea in 2008 and is expected to be remade by Warner Bros., starring Leonardo DiCaprio; Sayonara Itsuka, a Japanese language film, that I wrote became the highest grossing Korean film in Japan in 2010.

I’m Now Working On: A love story set in New York City to be produced by Terence Chang (Tisch alum; producer of Face/Off, Red Cliff, Hard Boiled); A US-Korea co-production project that deals with the rumored to be true story about a Korean soldier who had a fling with Marilyn Monroe in 1954; A suspense thriller set in Singapore to be produced in 2012; An action blockbuster film set in four Asian countries to be produced in 2012-2013.

’21 and Over’ begins shooting in China
Variety

Miles Teller (“Footloose”), Justin Chon (“The Twilight Saga”), Skylar Astin (“Taking Woodstock”) and Sarah Wright (“The House Bunny”) star in the pic, which follows two childhood friends who drag their straight-arrow buddy out to celebrate his 21st birthday the night before an important medical school interview, in an evening of debauchery that spirals out of control. But when one beer leads to another, the evening spirals into a wild misadventure of debauchery that none of them will ever forget. 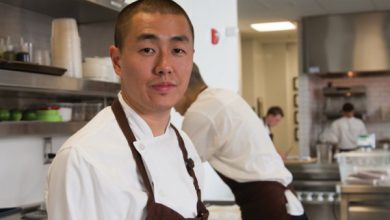 Photo by Vivien Kim Thorp San Francisco restaurant Benu was awarded two stars by the prestigious Michelin restaurant guide released yesterday, making it one of only three eateries in […]