The Beijing 2022 Winter Olympic Games have ended, but not without granting us fantastic performances from a myriad of Asian American and Pacific Islander athletes. Despite highly regulated COVID-19 protocols, competitors gave it their all, from the National Alpine Ski Centre to the Capital Indoor Stadium. Many took home gold medals, some in multiple disciplines.

One of those athletes was returning Olympic champion Chloe Kim, known for shredding the women’s halfpipe snowboarding event. She completed coveted back-to-back 1080s in PyeongChang’s 2018 games, when she became the youngest to ever win an Olympic snowboarding gold medal. She made jaws drop once again in Beijing, successfully defending the gold with her first run of 94 points.

Kim wasn’t the only young woman to dominate the games. California-born freeskier Eileen Gu, representing her mother’s home country of China, scored big in multiple freestyle skiing events. Gu stunned global audiences with her gold-winning performances in women’s big air and halfpipe, and even added a silver medal to her collection with her stellar showing in the women’s slopestyle competition. “I’ve always said my goal is to be an ambassador for the sport & create bridges by breaking boundaries and records, and I’m proud to say that in addition to plenty of sleepless nights, moments of doubt and fear, and immeasurable growth, I had the best 2 weeks of my life,” Gu wrote in a recent Instagram post.

The Olympic ice set the stage for many victories as well. Team U.S.A. earned a silver medal in the figure skating team event, with glorious performances from ice dancing team Madison Chock and Evan Bates as well as singles skaters Karen Chen and Vincent Zhou. Nathan Chen was afforded a shot at redemption in men’s singles figure skating, as his short program at PyeongChang 2018 was less than his best. Not only did Chen break the short program world record this year, scoring 113.97 points, he also performed a solid free skate to Elton John’s “Rocket Man” that finally earned him the gold medal. “To have the opportunity to be here at the Olympics and to be able to do what I did, it’s all thanks to people who have supported me during my career,” Chen said on NBC’s “TODAY” show.

In the women’s singles figure skating event, Alysa Liu skated two joyous—and completely clean—programs. “I never thought my Olympic experience would be this fun. Skating two clean programs here is something I always dreamed of and the fact that it actually happened makes me cry,” the 16-year-old stated on Instagram. Although they didn’t medal, Liu easily broke into the top ten, giving their all even during a competition marked by uproar over Russian doping practices.

Zhou and Andrew Heo also deserve a nod. Zhou helped the U.S. win silver in the figure skating team event, but was unable to compete in the men’s singles event due to testing positive for COVID-19. However, he triumphantly returned to the ice for the Exhibition Gala, letting his artistry shine during a beautiful performance to Harry Styles’ “Sign of the Times.” On the other hand, 20-year-old speed skater Heo competed in the men’s 1000m short track, coming in third during semifinal 2. Congrats to all the winners and competitors of the 2022 Winter Olympic Games! You can check out highlights of all these outstanding AAPI athletes and more on the NBC Sports YouTube channel. 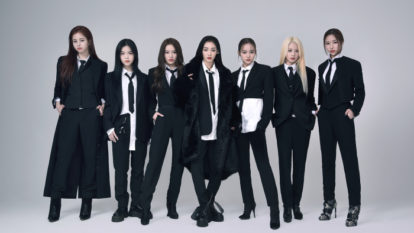 Signed to company XGALX, this seven-member group is ready to make waves.