According to Maurissa Tancharoen Whedon, a life in the “business” was almost inescapable. Growing up in Los Angeles’ San Fernando Valley, she started dancing nearly as soon as she could walk, and with the complete support of her Thai immigrant parents, she found herself dancing, singing and acting professionally, exposed to the workings of Hollywood at an early age.

In show business, however, there are the inevitable ups and downs. There were the highs of being in the Michael Jackson anthology film Moonwalker and touring with Boyz II Men as a member of the R&B group Pretty in Pink. But the many rejections were always a grind, according to Maurissa. “It’s not an easy life,” she says, “and as an Asian American woman, the experience was frustrating, to say the least.”

But being the creative talent she was, Maurissa discovered screenwriting and producing and was finding success in that field. She worked on shows like Drop Dead Diva and Dollhouse, and she would become the co-creator and co-showrunner of ABC’s Marvel’s Agents of S.H.I.E.L.D.

Yet as she’s facing the vagaries of show business, Maurissa has had to overcome an even more daunting challenge – lupus.

She was diagnosed with the chronic disease that affects the body’s immune system when she was 15. For those with lupus, the immune system cannot differentiate between the viruses, bacteria and other foreign bodies that make you sick from your own healthy tissues. So the body starts attacking itself, causing everything from inflammation and pain to organ damage.

In high school, Maurissa suffered severe, embarrassing rashes on her face (especially traumatizing when you’re a teenager) and had to apply professional makeup to cover it. The attacks would cause such extreme lethargy and arthritis that she quit dancing.

As an adult, it seemed every time she took a step forward in her career, lupus would cause a setback. Like in 2007, when she co-created the MTV show Dancelife with Jennifer Lopez and her director brother Kevin Tancharoen. As it was getting off the ground, another severe lupus attack forced her to move back in with her parents and required chemotherapy.

“It’s tried to take me down a number of times with flares that run the gamut – skin, joints, lungs, brain and kidneys – but I’m still here,” she says.

These days, Maurissa is doing more than just being here; she is helping to alter the landscape of television. “As a writer and producer, I have the opportunity to create characters for [Asian Americans] and shape how we are represented,” she says.

She knew she wanted to be a writer upon graduating from Occidental College and was soon working as a production assistant for Steven Bochco, and later, as an assistant to David Milch, who would become her mentor, reading her plays and offering invaluable feedback. His greatest advice: Keep writing. And so she wrote.

Her first screenwriting success was the sale of an Asian American action comedy with Jackie Chan attached. Although that film never got made, she ended up on different shows and would eventually meet her writing partner and husband, Jed Whedon. And when Jed’s brother Joss, fresh off of directing the blockbuster film The Avengers, started developing a show that delved further into the Marvel Comic universe, he enlisted the couple to help create Marvel’s Agents of S.H.I.E.L.D.

When I point out the fact that the Asian American presence on the show is particularly pronounced – there is, of course, the showrunner and two of the main characters – Maurissa lets out a laugh. “You are onto my not-so-secret agenda,” she says. “Truthfully, the characters May and Skye weren’t designed to be Asian American. They were designed to be strong, complex, kickass women, and Ming-Na Wen and Chloe Bennett were just the best actresses for the part. I’d like to think that we’re just creating characters that Asian Americans have always been capable of playing.”

Plus, there was something special about getting to cast Wen, whom she watched in The Joy Luck Club over and over with her mother. “I had always followed Ming-Na’s career, admired her as a person, actress and mother. When she first walked into our producers’ session for the role, I knew this part was hers. Hands down. The second she left the room, I said, ‘She’s playing Agent May, and I don’t care what any of you have to say.'” But there was a glitch. “Actually, before we cast her, the character’s name was Agent Rice,” she laughs. “So we had to fix that.”

Such moments notwithstanding, being the showrunner of a big-budget series isn’t the glamour gig one might expect. Maurissa likens it to a slowly sinking ship. “It’s full of holes, and you’re doing everything you can just to stay afloat,” she says. “As soon as you plug up one hole, another hole bursts.”

But on the upside, it’s something she gets to do with her husband. “Collaborating creatively has always been a huge part of our bond as a couple,” she says. Even before S.H.I.E.L.D., the two always seemed to be making things together, whether she was singing backup for his band The Southland or uploading silly Christmas duets on YouTube. “It is one of our happy places,” she admits.

“Of course, when you’re running a show with your husband, the work comes home with you,” she continues. “We sometimes have to make an effort – tonight is dedicated to romance, dammit! So we are sitting across from each other, a fancy dinner by candlelight at some amazing restaurant, and soon enough we find ourselves brainstorming the next episode. But the reason it works is because creating things together is part of our foundation. The moment it stops being fun, we have to check in with each other and assess.”

Keeping her loved ones close by – her father, Tommy, is the show’s transportation coordinator – is what empowers Maurissa. “Dad and Jed are my daily reminders of what really matters amidst all the stress and crazy of my job,” she says. And when a lupus attack hits, instead of crumbling, Maurissa turns her plight into an opportunity to educate others and serve as a light for those suffering from the same disease. She’s heavily involved with the Lupus Foundation and while May is Lupus Awareness Month, “there are still many people out there who don’t know about this debilitating chronic disease,” she says.

To help deal with the emotional and physical pain of her last flare-up, she created a blog, itssonotsexy.tumblr.com, posting photos of her symptoms (one of her leg and foot swollen to about eight times its size), discussing various treatments (Ayurvedic medicine, she says, seems to work for her) and dispensing her trademark humor in her deepest moments of frustration and sadness. Through it all, she always seems to evince a true-life superhuman resolve.

And while Maurissa will always need to be careful with her health, that doesn’t mean she can’t live life fully. In fact, she and Jed are expecting their first child in the spring, and every day she acknowledges her blessings. “Jed and I have been in love for 15 years. People who share that kind of love deserve to raise a child together,” she says. “I won’t give up hope; I never have, and I never will.”

Find out how you can help at lupus.org.

STORY BY ELAINE SIR
Photo by The Bui Brothers, thebuibrothers.com
This story was originally published in our Spring 2015 issue. Get your copy here. 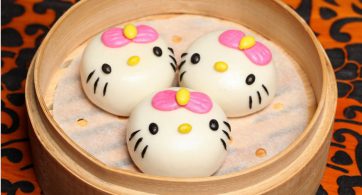 In the last few years, we’ve been seeing Hello Kitty cafes and food trucks popping up to bring adorable desserts with Hello Kitty’s face or her signature red bow […]