When her latest film Man From Reno won the top prize at the 2014 Los Angeles Film Festival this summer, Ayako Fujitani was initially confused. “Dave [Boyle, the director,] told me, ‘We won!’ and I said, ‘For what?'” she remembers. She laughs. “I had forgotten it was a competition! The project had come such a long way from the [initial] Kickstarter [fundraising campaign]. We had such a tough time even finishing the movie, and we were super happy to even get in the L.A. Film Festival. So when we won, we were super shocked and surprised, in a good way.”

This is the second time the hapa actress (born to Japanese aikido master Miyako Fujitani and American action star Steven Seagal) has worked with Boyle, the first experience being in his 2012 black- and-white indie romance Daylight Savings, in which she had a supporting role as Goh Nakamura’s ex- girlfriend. After that wrapped, Boyle was working on a crime film that started out as a pair of simultaneous mystery stories with vastly different protagonists, a Japanese writer and an elderly sheriff. The sheriff character, who’d eventually be played by Pepe Serna, came from an unproduced screenplay Boyle had written previously, but the Japanese writer Aki was a new addition and written with Fujitani in mind.

“I think she has a unique cerebral soulfulness about her that was perfect for the part of Aki,” says Boyle. “While the sheriff’s storyline is more of a traditional police procedural, Aki’s is a bit more emotional and character driven. She is the classic amateur sleuth, but she has secrets of her own that make her darker than your average heroine.”

“Aki is a very successful Japanese mystery novel writer who’s not happy about her success for some reason,” explains Fujitani of her bilingual character. “She runs away from her book tour to San Francisco – and runs into a real mystery.”

During post-screening Q&As during the film’s festival run, Fujitani remembers Boyle joking that after she got involved, the Aki character suddenly became super dark. “Before, the character didn’t feel too much regret or sadness,” says Fujitani. “But if she was happy, no one would really care about what she goes through.”

“[Once] we realized how game Ayako would be to push the character further and further into the darkness, she made all three of us [Boyle and co-writers Joel Clark and Michael Lerman] braver as writers to make the character rougher around the edges. Her fearlessness gave us confidence,” says Boyle.

Though Fujitani wouldn’t describe herself as the type of actress who practices method acting, it was difficult for her to get Aki out of her head. Part of the reason was because they shot many of the film’s foreboding scenes in a hotel room in San Francisco, which was right next door to the actual hotel room where Fujitani stayed during the weeks they were filming in the city. “When you’re basically on the set in the same hotel room the whole time, it’s almost impossible to forget the character,” she says. “It helped my acting a lot, to get into the maze of this world, but I felt like I had no way out.” She laughs.

“So after I finished the movie, it was like, I need to go to Hawaii or something!”

A relaxing vacation wasn’t in the cards, however, because Fujitani, also a filmmaker herself, has been working on numerous projects that take her back and forth between the U.S., Japan and Korea. Her short film The Doors, shot entirely on an iPhone 5 without any special lenses, recently played at the Asian Film Festival of Dallas. (It was originally made for the Olleh International Smartphone Film Festival in South Korea.) She also co-wrote a four-episode short film series, A Rose Reborn, a collaboration between acclaimed Korean director Park Chan-wook and the Italian fashion house Ermenegildo Zegna, which stars Daniel Wu and Jack Huston. She is currently developing another Korean short film, a dark comedy that follows a nervous, picky, routine-driven businessman.

“She’s very confident and has a great eye and ear for unusual characters and interesting dialogue,” says Boyle of Fujitani’s work as a writer and director. In fact, he often relied on Fujitani’s instincts when it came to the Japanese-language scenes in Man from Reno, which also stars actors Kazuki Kitamura, Yasuyo Shiba, Hiroshi Watanabe and Tetsuo Kuramochi. “We worked with a lot of great translators during the scriptwriting process to make sure the Japanese version would be up to snuff, but a couple of days before we started shooting, Ayako and I did a last brush up that did amazing things for the movie,” says Boyle. “Having her ear at our disposal was huge.”

Man from Reno, which has also won awards at the San Diego Asian Film Festival and Wichita’s Tallgrass International Film Festival, has a theatrical release planned for next spring. Next up, Fujitani is off to shoot a film with Japanese director Takashi Miike, known for bloody cult films such as Ichi the Killer, Audition and 13 Assassins. “After I had been in Korea for a while, I visited Japan, and as soon as I arrived and turned on my Japanese cell phone – which is never on when I’m in another country – I get a call from Miike’s producer,” says Fujitani of the role she seemed fated to get. A fan of Miike’s work, Fujitani said yes before she even read the script. She plays a nurse in a medical drama about doctors from Nagasaki, Japan, going to Kenya. “This is a departure for him,” she says. “It is definitely not one of the horror, crazy-in-a-good-way films that Miike is known for.”

Photo courtesy of Chika Okazumi.
This story was originally published in our Winter 2014-15 issue. Get your copy here. 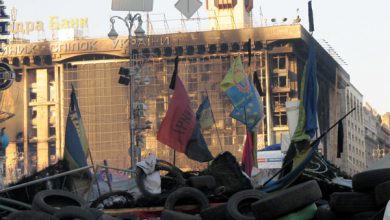 This scene from the Euromaidan revolution, when Ukrainians protested the pro-Russian policies of the former president, was taken by the writer’s father. by SERA CHANG When Malaysian Airlines Flight […]