In her 2013 appearance on Comedy Central’s John Oliver’s New York Stand-Up Show, Ali Wong has a joke about how being an ambitious, independent woman is overrated: Why work so hard to pay for your own stuff, when you can be like one of those “genius” housewives just chilling out in Whole Foods in the middle of the day? “I’m all about girl power and everything,” she says, her eyes like daggers behind her trademark glasses, “but when I get married, I’m straight up not gonna work anymore.”

Two years later, she has that ring on her finger, but if anything, her workload has increased. Even when she was hired last year as one of the writers of the popular ABC sitcom Fresh Off the Boat, she continued to perform her stand-up comedy every night.

Ever since Wong attended her first open mic night at a cafeÌ a decade ago, the longest she’s gone without doing stand-up is 13 days, and that was when she was in Japan for her honeymoon. Even her wedding was planned around shows she had already scheduled at San Francisco’s Punch Line Comedy Club, where she rushed to after her banquet reception. She performed her set in her white wedding dress and veil because she didn’t have time to change.

Most people don’t realize the commitment it takes to perfect a stand-up act. Wong thinks writing stand-up is much more difficult than writing for a television show. When she’s writing for Fresh Off the Boat, not only does she have a team of writers, actors and executives to vet her jokes, but there’s also an existing premise and characters to create stories from. For stand-up, on the other hand, she needs to do all of her own set-up in the most concise way possible. Therefore, every pause and enunciation needs to be delivered with peak effectiveness. “It’s like going to the gym,” says Wong, of her comedy routines. It takes numerous tries to figure out the joke, and even then, each of her jokes has to kill at least 20 times onstage before she starts to believe it might be good enough for her regular set. And if doing one to three shows a night in California (a San Francisco native, she currently lives in Los Angeles) is her daily exercise, living in New York when she was in her 20s was like going to boot camp: She’d do up to nine sets a night, venue-hopping from 7 p.m. all the way to 2 a.m.

“I think that’s why a lot of women don’t do stand-up,” says Wong. “It’s not that women aren’t funny, because women are super funny. I don’t think a lot of women are willing to go out every night and sometimes drive really far for not that much pay. But stage time in front of a completely anonymous audience with no industry there is extremely valuable to me.” She laughs. “Sometimes I think, ‘Why am I making so much effort?’ But the truth is that I really love it.”

Though Wong didn’t grow up with dreams of performing, public speaking always came naturally to her. She was the president of her high school class, and in college, she performed sketch comedy and improv with UCLA’s LCC Theatre Company, but it wasn’t until she graduated that she gave stand-up a try. She performed with the comedy group Stage Ninjaz, an offshoot of LCC; the only girl, her nickname was “Stage NinÌƒa.”

That’s when she fell in love with stand-up as an art form. She liked having complete creative control. “You’re like an assassin,” she says. “Not in the sense that you kill people, but you’re nomadic, you don’t depend on anyone except for yourself and all you need is a microphone.”

Though Wong has acted in television shows – her series regular roles include best friend Olivia in NBC’s Are You There, Chelsea? and Dr. Lina Lark, a quirky radiologist in Black Box – Fresh Off the Boat is her first experience working as a staff writer on a TV show. Though she was initially hesitant to commit to a job that would keep her from touring for six months, she took a leap of faith, believing it would be a historic show for Asian Americans. Now she calls it one of the best creative experiences of her life.

Fresh Off the Boat gave her not only a diverse community of writer friends but also women mentors. “It’s not only the showrunner [Nahnatchka Khan], but the number two and three writers are also female,” says Wong. “So that means if Nahnatchka isn’t there, then Kourtney Kang [who worked on all nine seasons of How I Met Your Mother] is running the room. And if she’s not there, then it’s Dana Kline [who was a producer on Friends]. It’s very unusual to have the three most senior writers in the room be women.”

Though she identifies with the immigrant storylines – her mom is Vietnamese, and her dad is Chinese, but she grew up very Chinese American (“My dad literally colonized my childhood,” she jokes) – very few of the show’s references come directly from her own personal experiences. In fact, there is very little overlap between her TV writing and stand-up jokes, which are not only more autobiographical but considerably less family-friendly. (One of her more memorable bits has her educating men on the proper way to spank, pull hair and choke a strong-headed woman in bed.)

And while she appreciates the intense attention Fresh Off the Boat has gotten from Asian Americans, at the same time, she finds the nit-picking over every detail’s authenticity disempowering as well. “Do you think white families watch Modern Family and say, ‘My uncle doesn’t wear shirts like that!?'” she asks. “These are fictional characters. Why don’t we gift ourselves the freedom to be individuals, to be whoever we want to be?

“I hope it will inspire a wide diversity of Asian American sitcoms,” she says, especially now that Fresh Off the Boat will be returning for a second season. In fact, she hopes to become a showrunner herself one day.

Though she thinks she’d probably have to do it for cable: “I’m not as good at keeping my humor clean as Nahnatchka is.”

Photos courtesy of Melly Lee.
This story was originally published in our Summer 2015 issue. Get your copy here. 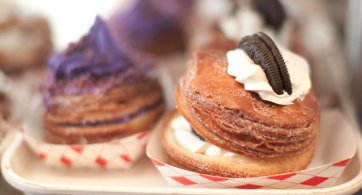