Grace Huang discovered her love of acting after being beaten into a coma by her abusive husband – on a television show, that is. Already working as a model, Huang didn’t think it’d be much of a stretch when she was cast as a model-slash-socialite for a Taiwanese television series. “I just thought, OK, let’s try it,” says the rising Sydney-based actress, who most recently appeared on the cover of Australia’s InStyle magazine alongside the likes of Miranda Kerr and Bella Heathcote. “It actually ended up being more difficult than I thought, but that’s how I fell in love with it.”

Born in Taiwan and raised in Australia, Huang has since appeared in films like The Man with the Iron Fists, Infini and Bloodtraffick, playing weapon-toting warriors and vigilantes. Huang ventures into new territory in Lost for Words, where she plays Anna, a reserved ballerina who moves to Hong Kong to join a prestigious dance company. While there, she meets ex-Marine Michael (played by Sean Faris), and the two must battle culture, politics and language barriers to be together. Anna may seem like a far cry from Huang’s usual kickass roles, but Huang sees if differently.

Audrey Magazine: How would you describe Anna?
Grace Huang: She’s very focused. She’s obviously dedicated to her dancing and her goals in life. I think she’s very brave, because once she knows what she wants, even though it gets very difficult and there are a lot of hurdles with Michael, she’s committed.

AM: Anna is very different from her best friend Mei Mei. How would you describe their relationship?
GH: They’re yin and yang. Although they’re very different and Mei Mei drives her crazy, there’s that love and that bond. It’s like family: They infuriate you, but you love them anyway. They highlight what the other doesn’t see, so it’s a complementary friendship that they have.

AM: What was it like working with Sean Faris?
GH: Sean’s a great guy. It was his first trip to Asia, so it took him a while to take it in. I told him Hong Kong is a good place to start for a first trip to Asia because Hong Kong is such a good mix of East and West. We got to hang out and get to know each other – he’s easy on the eyes, so I’m not complaining.

AM: Did you have any prior dance experience, and what did you do to train for the film?
GH: Luckily, I did have a little dance experience. I did jazz and ballet when I was a sophomore in high school. But I ended up doing more modern dance [onscreen], because there was no way I could train en pointe. Training for it was agony! I trained two months before shooting. It was six to eight hours a day, and it wasn’t just learning the routine; I had to stretch and try to do the splits. I wanted to do as much as I could to be authentic.

AM: Your past roles involved playing kickass, powerful women, but Anna is so different. What drew you to this role?
GH: I thought, “Wow, I don’t have to be a cop or an angry corporate person or a misunderstood, f-cked up character.” Then I discovered that she’s soft on the outside, but she’s actually still very strong in her convictions. There’s no ulterior motive with her.

AM: You’re a fluent English speaker. Was it difficult playing a character who struggles with English?
GH: It was hard because obviously I can do my Aussie accent, I can do my American, I can do my British, but to do non-perfect English – even though we all know people in our lives who [speak that way] – to not overdo it and seem like we’re making fun of it, that was hard.

AM: Other than overcoming racial and cultural barriers, what does Lost for Words say about love?
GH: To be brave and make a choice. In this day and age, there are so many choices we can make. You don’t have to go and study and then find someone and get married. I have friends who are single, and I’m single myself right now. Before, there were social norms where you felt that you had to go with the flow. Now, there’s no flow that you have to follow. This movie lets you know that it’s OK to be brave; make a choice and stick with it. Once you commit, that’s when your journey starts.

Lost For Words is out on DVD June 23
Feature image courtesy of Ukay Cheung
This story was originally published on our Summer 2015 issue. Get your copy here. 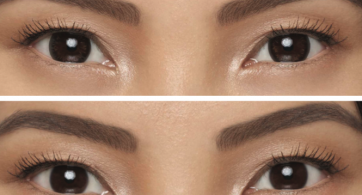 An Asian model with 1-Day Acuvue Define in Natural Shine, top, and without, bottom.   When circle lenses took off in Asia in the early aughts, everyone walked around […]