To vote, follow us on Twitter @audreymagazine and tweet at us with “My vote for the ultimate hottie goes to [Insert Name Here/Twitter] @audreymagazine #HaikuswithHotties http://kck.st/1N8wnGK” The votes not only tell us who you want us to pursue, but they make it easier for us to convince them to participate if they know that their fans really, really, really want them to be in the calendar.

Vincent Rodriguez III is a Filipino American actor who can be seen as Josh Chan in CW’s new Fall 2015 musical-comedy, Crazy Ex-Girlfriend, premiering October 2015. He’s the special guy the lead (Rachel Bloom) was always obsessed with way back when, and she runs into him 10 years later and realizes he’s still hot. And then she breaks out into song and dance.

Here are the original 10 that you can still vote for:

Also, the campaign is still running for 26 more days, so if you want to pre-order or check out one of the other reward perks, go for it! 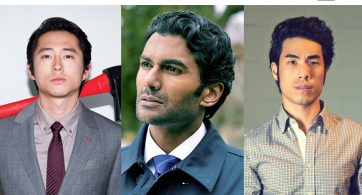 Have you heard of our Kickstarter where we were trying to convince our publisher to let us make a calendar out of Audrey Magazine’s non-award-winning series Haikus With Hotties? […]