Today is Korean American Day, a celebration of the first Korean immigrants’ arrival in the U.S. on Jan. 13, 1903.

Early Korean immigrants, who landed in Honolulu onboard the SS Gaelic, worked on the state’s sugar cane plantations as contract laborers.

According to Pew Research Center, the majority of today’s Korean population in the U.S. arrived after 1965 — as of 2010, Korean Americans numbered 1.7 million across the country, with the highest concentrations in California and New York.

“With nearly two million Korean Americans living in the United States, their cultural, economic, and civic impacts are far reaching,” Rep. Ted Lieu, whose congressional district is based in Los Angeles County, said in a statement. “From Korean cuisine to Korean pop culture, or ‘Hallyu Wave,’ our country has vastly benefited from a more diverse and inclusive society, once again reminding us of America’s legacy as a nation of immigrants.” 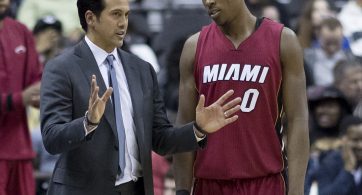 The Miami Heat confirmed last month that Erik Spoelstra received a contract extension to continue coaching for the team. The 46-year-old Spoelstra, a Filipino American, is the first Asian American […]