A Korean American high school student’s winning piece in a national art competition proved to be plagiarized, prompting her disqualification.

The senior at Bellevue High School in Washington state, Solbi Cheon, produced a piece titled “New Generation vs. Old Generation,” which was named the winner in the 9th District of Washington for the 2013 Congressional Art Competition.

Cheon was set to be awarded a scholarship and a trip to Washington, D.C., where the piece was going to go on display at the U.S. Capitol Building.

Cheon’s art, which depicted a boy looking through a magnifying glass at Korean children of past eras, was praised in the Korean media. But the friends of Korean graffiti artist Gu Heon-ju told him that someone might have copied his large-scale artwork he made at an elementary school in Busan in August of 2012.

The high school student later admitted she used Gu’s art to introduce Korean culture to students in the United States and said it was not her intention to plagiarize. She petitioned the organizers of the art competition for a retrial and made an apology to Gu.

The graffiti artist was satisfied with the Cheon’s admission and told Korean media he “won’t make an issue of it” any further. However, Cheon was disqualified from the competition since the rules clearly stated that that the artwork “must be original in concept, design, and execution” and it was determined the winning piece was in violation of this rule. 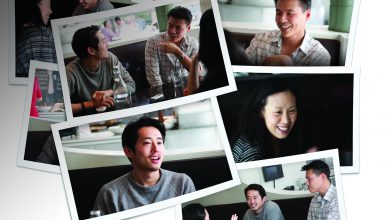