A World Health Organization report confirms what most of us already knew: Koreans are lushes. But all that boozing comes with a cost.

It’s official. Koreans can drink. The recently released Global Status Report on Alcohol and Health 2011, compiled by the World Health Organization, confirmed as much.

Korea ranked 11th with a total per capita consumption of 14.80 liters of pure alcohol in 2005 (the most recent year studied). In other words, that’s the equivalent of everyone in Korea over the age of 15 drinking a staggering 196 bottles of Chamisul Original soju in the span of one year. Gag, I mean, cool.

Though the top 10 boozers were composed of European nations (Republic of Moldova was no. 1), Korea, compared to other Asian countries, can drink the entire continent under the proverbial table. The next Asian country on the list, Japan, ranked far behind, in 55th place. Notably, Korea is the only Asian country even listed in the “Top 20.” (The United States, in case you were wondering, ranked 57th.)

But before you crack open that Hite to celebrate your bragging rights, you must know that all that boozing comes at a cost. According to the report, in 2005, 33.1 Korean males per every 100,000 of the greater population over the age of 15 died of liver cirrhosis; 29 males per every 100,000 perished after road traffic accidents. By contrast, in Ireland a country also known for get-
ting blitzed, the percentages for such deaths are significantly lower. According to a report published in 2009 by the Korea Alcohol Research Center (KARC), alcohol-related problems cost the country about $20.99 billion in lost productivity, death and medical expenses, among other costs.

The alarming data begs the question: Why do Koreans drink so much?

The answer is a complex one and many factors, such as culture, policy and taxation, likely play a role. Jinuk Baek, a policy researcher from the South Korea-based KARC cites deregulation, lax taxation and economic growth as factors contributing to increased consumption in the past two decades.

“Beer was very expensive in the 1980s; nowadays it’s very cheap,” he states. “There are few regulations for alcohol retail.” As a result, soju can sometimes cost less than a bottle of water, and alcohol retailers are ubiquitous and sell at all hours of the day or night. “Last call” is up to the discretion of the owner. So as long as people are drinking, they’ll keep pouring.

These policies set up the ideal environment for Korea’s peculiar business culture to flourish. There aren’t too many places in the world where having a hollow leg is a preferred job qualification. In Korea, however, the ability to drink large quantities is seen as beneficial to group cohesion since a fair amount of binge-drinking occurs with co-workers at company-sponsored outings, known as hoesik. Typically, the night starts off with dinner and soju. The second round (icha) usually takes place at a bar or nightclub where whiskey is served. The third round (samcha) typically involves singing karaoke at a noraebang, accompanied by plenty of soju bomb-shots (called poktanju). Fourth round (sacha) can involve more eating and (wait for it…) more drinking.

The traditions of sujak (pouring a drink and sharing the cup) and guneum (group drinking) are unique to Korea and stem from the country’s agrarian heritage where the short planting and harvest seasons required collaborative farming. What better way to enlist your neighbors’ help than by plying them with drink? Yet, traditions that were once limited to certain times of the year have become a regular and entrenched part of corporate life.

Unfortunately, binge-drinking is not relegated to office workers. In fact, according to a KARC study, it increased from 53.5 percent in 2000 to 68.1 percent in 2006. In addition, according to Korea’s Ministry of Health and Welfare, the percentage of women aged 20 to 59 who report being current drinkers rose from 23 percent in 1989 to 40.8 percent in 2005. The amount women are drinking have soared, too. The percentage of women aged 19 and up who report consuming five glasses of soju (roughly three cans of beer) in one sitting has increased nearly 10-fold.

For American expats, the “when in Rome” philosophy can be an eye-opening (or, rather, eye-shutting) experience. Eunice*, a Korean Angeleno who moved to Seoul last year admits, “When I first got there, I was hungover the first full month.” But soon, the pervasive alcohol abuse began to wear on her as she was greeted each morning with the sight of a different middle- aged man, passed out near her door next to a pile of vomit. “I was actually very depressed by it,” Eunice states. “Seeing all these older guys in their 40s and 50s, coming home wasted. Honestly, I was disturbed by it.”

Similarly, Ed*, a 40-year-old Korean American, described a typical early morning in Hongdae, a popular night-club area in Seoul, as “something out of war, it’s like casualties. People are lying on the ground. It’s craziness.”

Such sights are no doubt what inspired the site blackoutkorea.blogspot.com, which posts photos of inebriated Koreans passed out on the ground. The site, run by an American English teacher, has since been changed to “invite-only,” thus ensuring that the site owner and visitors can laugh at Koreans, not with them. Despite the blog’s problematic nature, it does highlight the fact that people in Korea have an incredibly high tolerance for public intoxication.

In fact, says Cho, it’s unclear what strategies could even begin to reduce consumption. Apart from a tepid warning label policy, a legal drinking age of 19, and regulations against drunk driving, the government hasn’t put forth many other initiatives to curb consumption. Cho states, “Frankly speaking, most health experts recognize alcohol’s harm, but most Koreans have an alcohol-friendly cognition, attitude and value system.”

He’s also skeptical that proposals to increase the alcohol tax will gain much traction. Some studies suggest that tax hikes wouldn’t work anyway. The article “Alcohol Consumption Decisions in Korea,” published in the Journal of Family and Economic Issues, concluded:“All else being equal, imposing a higher tax on alcohol is not likely to have much effect.” According to the study’s findings, “Cultural norms regarding alcohol consumption may dominate the decision-making process in Korea.”

Clearly, a cultural shift needs to take place if Korea wants to control alcohol abuse and the subsequent cost to society. In recent years, some modest changes have taken place. For instance, in 2007, the Seoul High Court ruled that a manager of an online gaming company had to pay restitution to an employee for forcing her to drink— the first ruling of its kind. Individual companies have also tried to curtail profligate hoesik over-indulgence, imposing time and spending limits on the outings. Notably, Kolon Industries, a Korean chemical fiber company, in recent years has conducted a company blood donation drive in lieu of its year-end hoesik.

Yet, the most potentially effective reduction strategy is also likely the hardest to implement. With drinking such a deeply ingrained part of Korean history and culture, can Koreans really recalibrate their perceptions of  “normal” consumption? Perhaps the first step is realizing that just because you can drink someone under the table doesn’t mean you should.

*Both Eunice and Ed declined to provide their last names. 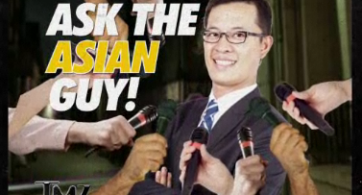 Got this in our inbox and didn’t quite know what to make of it – on the one hand, it’s TMZ. I mean, ’nuff said.But on the other hand, […]