The curtain has officially been dropped on Los Angeles’ theater productions. This includes the Geffen Playhouse’s run of “Man of God“ and plays put on by the historic Asian American theater group East West Players.

Initially, the Geffen announced that “Man of God” would be postponed from its original dates of March 3 to March 10. However, on March 11, it was decided that its run would be canceled, with no plans of revival. The play, written by Anna Moench and directed by Maggie Burrows, features a majority Asian American cast and centers around four girls’ mission trip to Thailand.

“Man of God” actress Jenapher Zheng was just one of the many affected by the cancellation, and the noose tightening around the performing arts world. “With projects being canceled, no income stream remains, and so many of us have filed for unemployment,” Zheng says. However, she adds that she finds comfort in her memories of the better times with her castmates and production crew. “I’ve been facing this grief with newfound acceptance and gratitude knowing that, as a team that got to perform nine times, we were luckier than most. I am beyond grateful and proud of what we accomplished for this show.”

Actress Camryn Kim, meanwhile, holds onto hope for the future of the play. Despite its brief time at the Geffen, there’s no telling where “Man of God” might go next. “While this particular production may have been cut short, I have no doubt that a great number of theaters will eagerly jump at the opportunity to add ‘Man of God’ to their repertoires and bring this vital story to new life,” Kim says.

Others remain confident in the ability of the local community to bounce back from these troubling times. East West Players announced on March 12 that all current productions would be halted, including a run of John Weidman’s “Assassins.” EWP are currently working to secure new dates as information surrounding COVID-19 develops, and they’ve also developed creative ways to keep some aspects of their operations alive, including robust online programming and moving their annual screenwriting and acting classes to Zoom.

Andy Lowe, director of casting and production at East West Players, contemplates the history of the local community and the space that it creates for AAPI representation. He reflects, “In the sense that Little Tokyo is a 100-plus-year-old community that has endured through depression, war and even displacement by way of internment, and that even after its own traumas, it proceeded to welcome artists and artistic organizations like ours and leave space for us, I find that resilience in Little Tokyo inspiring, and I hope we all can continue that legacy of place keeping.” 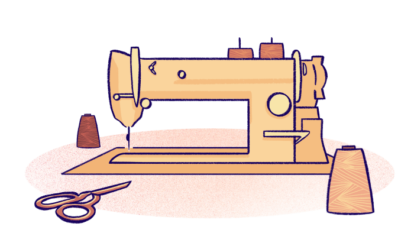 For almost 30 years, first-generation immigrants Mimi and Steve Yu have owned Ki Sung Corporation, manufacturing their clothing designs in China and selling them wholesale to the garment industry […]