In many ways, what Paul “PK” Kim does as a stand-up comedian and the founder and organizer of the annual Kollaboration talent show couldn’t be more different from the work of his pastor father.

But, from another perspective, this Pastor’s Kid, which inspired his nickname PK, has followed in his father’s footsteps not so much lock-step as, well, freestyle. Both pastor and kid move people with a mic. Both have kept the faith through difficult challenges. And their respective movements — one spiritual and the other, social and artistic — started small and have since grown followers by leaps and bounds.

Each in his own unique way has inspired believers.

“My parents are the No. 1 reason why the Kollaboration movement exists,” PK Kim told the audience at the K.W. Lee Center for Leadership banquet in Los Angeles, where he accepted an award in May. “My dad started a church with one family in 1976, the year I was born, and grew it to 3,000 people by 1996.

“My dad is proof that if you have vision, faith and hard work, it will lead to great things.”

Vision, faith and hard work could also describe the path to Kollaboration, which began in 2000 as a modest showcase for Korean American performers who sang, rapped, danced, did stand-up or spoken word in L.A. and has since exploded into a much-anticipated annual Asian Pacific American talent show with venues in Chicago, Atlanta, New York, Washington, D.C., and Toronto, in addition to L.A. Past performers at Kollaboration include Far*East Movement, whose music can be heard on mainstream radio airwaves and feature films, as well as Ben Chung of the JabbaWockeeZ and Mike Song of KABA Modern, who were made instant stars as competitors on MTV’s “Randy Jackson Presents America’s Best Dance Crew.”

Eight years since its debut, Kollaboration’s production values may have gone up, but it remains a nearly all-volunteer labor of love. Kim credits his financial partner of four years, Roy Choi, who turned the organization into a nonprofit, along with loyal (currently unpaid) staffers Rina Lee and Christine Kim for the success of the show, which is also supported by a legion of mostly young but inspired volunteers.

The most recent L.A. Kollaboration in February sold out — some 2,000 seats — two weeks before the show.

“I almost cried,” says Kim, who used to host “Asian Night” at L.A.’s famous Laugh Factory and performs regularly at comedy clubs and colleges. “Usually, I come out on stage [at Kollaboration] and I say, “Asians in the house!’ — and people clap. This time, I said, ‘Asians in the house!’ — and it was like a roar. Yeah, it’s time for us. It’s our time to shine. The talent level is really, really skyrocketing for young Asians in everything.”

Kim talked with KoreAm about being a pastor’s kid, his eight-year journey with Kollaboration, and his personal odyssey as a now-31-year-old married, father-to-be who hasn’t given up his dreams (he wants his own HBO comedy special and for Kollaboration to be at Staples Center within 10 years) even under the weight of age and responsibility.

Were you always drawn to the world of arts and entertainment?

I was always curious about it. I just loved stand-up comedy more than anything else. The idea of making a whole room laugh and crack up, that was amazing to me, like a magic trick. Then I thought, you can make a living doing this?

Four years ago, I was at a friend’s funeral. He was in a small plane accident. His mother was crying over his casket, yelling over and over in Korean, “He never got to do what he wanted to do.” At the time, I was working in a cubicle … I realized life is short. Now, I pretty much go all-out (to pursue my dreams).

What attracts you to stand-up comedy?

Once you get a laugh, it’s the best feeling. It’s almost therapeutic. They say the closest distance between two people is laughter.

Also, being one of only a few Asians growing up, I remember the way to fit in was to be funny. I grew up really skinny, and they would call me “Chopsticks.” I was a preacher’s kid, not allowed to listen to sexual music. … It’s so complex to find your identity when you’re young; it became a big part of my identity to be the clown.

You refer to your pastor father as your hero. How so?

He was not the all-American dad, you know, he never played catch with me. He was so busy growing the church. I think that’s one of the reasons I do comedy. If you look at the sons of comics, theirparents weren’t around. At the same time, when I looked at my dad, I saw one person with a microphone could move so many people with a message.

Tell me about how Kollaboration got started.

Back [in 2000] there were a lot of Korean pop shows with laser lights and people dressed in shiny outfits, but they didn’t really represent us, Korean Americans. I wanted a show that showed our identity onstage. Our motto is “empowerment through entertainment.”

In the beginning a lot of people were saying it’s not going to work, even after the first show. It just really motivated me to make it work. I feel like our Kollaboration we built is nonpolitical, it’s just for Asians to express themselves, just keep it real. Whatever is in your heart, pour it out, and also [it helps] break stereotypes. It’s the power of cool. Everywhere you go, “cool” is defined by Hollywood and white people. Asians are never viewed as cool. For us to change that, the only way is to enter mainstream media. So I feel like it’s helping raise the next generation of Asian kids who can be creative.

You’re in your 30s now, married and expecting your first child, so you must feel additional pressure to make a more stable living?

All my focus is on working hard and becoming stable, but also, too, my wife supports my dreams.

Did you ever consider giving up the show?

No way. That’s the good thing about my work. I deejay weddings on the weekend, so it allows me to pursue what I want to during the week.

Kollaboration started as a Korean American talent show, but this was the first year it went pan-Asian. Why did you expand it?

We would go to other cities and even in L.A., there were a lot of Asian people coming out to the show asking, ‘Why is it [just] Korean?’ We started seeing that were so many Asian people feeling the whole movement, too. We kept discussing it and defining what is Korean and defining what is Asian. … As Asian Americans, we really go through the same experience — a hate crime against one Asian is pretty much a hate crime against all of us. We decided to take it to another level and expand.

When you started Kollaboration, you were only 23. Has your perspective on Kollaboration or what you do changed at all?

I never thought it’d be a multi-city show. I thought it would just be in L.A. and [now], friends are directing it in other cities. It’s become my life. It’s pretty much what I wake up for. I’m thankful to God. I really know this is why I’m on earth. My mission in life is to get as many Asians on stage expressing themselves. 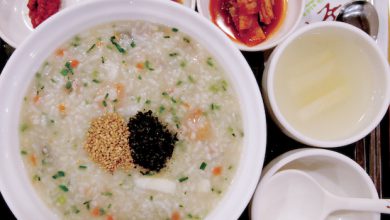 By Christine Pae Photographs by Eric Sueyoshi A standard pot of juk is ordinary and rather plain fare for what it is: short-grain rice simmered in water until it becomes […]