This year, the Sundance Film Festival offers up one of its most diverse lineups yet. Of the 56 films selected for competition in Park City, Utah, in 2019, 42 percent of the directors are women, 39 percent are people of color and 23 percent are LGBTQAI+. And with 9 out of 16 films, more than half the directors in the U.S. dramatic competition category feature females at the helm. Here’s a list of the movies we’re most excited about.

HALA A dutiful and intelligent teenager in Chicago comes into her own as a woman in Minhal Baig’s Hala, a feature-length version of a short that debuted in 2016. As Hala (Geraldine Viswanathan) looks toward high school graduation, she experiences a sexual awakening through her classmate Jesse, sparking challenges to her Muslim faith and her Pakistani immigrant parents’ cultural expectations. Viswanathan had a breakout performance in last year’s comedy Blockers. She’s joined in the cast by Jack Kilmer, Gabriel Luna, Purbi Joshi, Azad Khan and Anna Chlumsky.

LATE NIGHT The Mindy Kaling-written and Nisha Ganatra-directed Late Night  centers on a longtime talk show host (Emma Thompson) facing falling ratings and accusations of being “a woman who hates women.” So she hires Molly (Kaling), who checks all the diversity boxes—Indian American, female—to join her all-male writers’ room. Ganatra’s directing and producing credits include Transparent, Mr. Robot, The Mindy Project and Girls.

MS. PURPLE The latest from director/writer/producer Justin Chon, whose critically acclaimed Gook previously won Sundance’s NEXT Audience Award, is Ms. Purple. And like that last film, it is set amidst the Korean American community of Los Angeles. This time, we meet Kasie (Tiffany Chu), a Koreatown karaoke hostess who works a demeaning job to pay for her ailing father’s care. When the nurse quits, and with her father nearing death, she has no option but to reconnect with Carey (Teddy Lee), her estranged brother.

ONE CHILD NATION Filmmaker Nanfu Wang, whose 2016 work Hooligan Sparrow was shortlisted for the Academy Award for best documentary feature, created One Child Nation after becoming a mother. Her latest, co-directed with Jialing Zhang, tackles China’s one-child policy—which was in effect from 1979 to 2015—through a human rights violation lens. The filmmakers unearth revelations through an investigation that spans interviews with journalists, officials, parents and activists, and dives into the oft-hidden horrors the rule spawned, which included widespread child abandonment.

THE FAREWELL Writer/director Lulu Wang and Crazy Rich Asians’ breakout star Awkwafina come together for The Farewell, a comedy about a Chinese family that plans an impromptu wedding to gather and say one last goodbye to their sick grandmother. They love her too much to tell her that she is suffering from a terminal case of lung cancer—a secret her American granddaughter Billi, who’s traveled to China from New York, struggles morally with. Wang, who was born in Beijing, is best known for directing the 2014 feature romance Posthumous; and the ensemble cast, led by Awkwafina, includes Tzi Ma, Diana Lin, Zhao Shuzhen, Lu Hong and Jiang Yongbo. 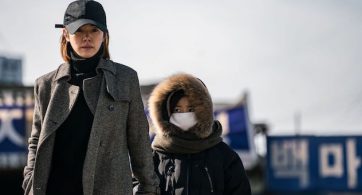 2018 was a seminal year for Asian American cinema with the wild success of “Crazy Rich Asians” that depicted a fantasy of Asian American life. New York Asian Film […]