World, keep an eye out for Chaitanya Karamchedu, a senior at Jesuit High School in Oregon.

From his school lab, the teenager has discovered an inexpensive method to make ocean water drinkable by taking salt out of it, a process that has largely been expensive and difficult to implement.

His discovery came after the realization that he could take advantage of the fact that only 10 percent of saltwater is actually bonded to salt.

“Chai [Karamchedu’s nickname at school] just looked at it and said if 10 percent is bonded and 90 is free, why are we so focused on this 10 percent, let’s ignore it and focus on 90,” Dr. Lara Shamieh, his biology teacher, told KPTV, a local news station.

Karamchedu’s method could revolutionize water accessibility to millions across the globe. According to the United Nations, more than 660 million people lack access to safe drinking water.

“The best access for water is the sea, right?” Karamchedu told KPTV. “Just because 70 percent of the planet is covered in water, almost all of that is the ocean. But the problem is, of course, that it’s saltwater. … It’s a crying issue that needs to be addressed.”

According to the station, Karamchedu has already picked up several awards, including a $10,000 prize from the U.S. Agency for International Global Development at Intel’s International Science Fair. 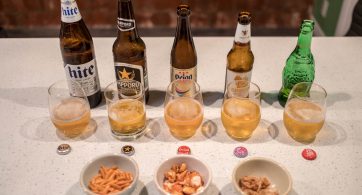 Wondering what to drink and eat on Super Bowl Sunday? Let us help you out — the Kore Asian Media staff conducted a taste test of best Asian beer […]