As two girls walk by, one spots him and taps her friend excitedly on the shoulder before pointing in his direction. Too shy to approach him, they settle for sneaking peeks at him, whispering to one another and giggling. This, J.R. Celski explains, has become an odd but normal encounter for him. Of course, the big fuss over him is all for good reason. After all, in addition to his boyishly good looks, this Filipino-Polish American Olympic speed skater already has 16 championship medals under his belt, all by the age of 23. And if things go well at the Olympic Games in Sochi this coming February, he’ll have four more to add to his collection.

Celski began his competitive career at the age of 4, and by 12, he wanted to compete in the Olympics. This was not your average pre-teen goal, but thankfully his parents went along with it. Having grown up in the state of Washington, “I actually needed to move away if I was going to get any better at skating,” says Celski. “[My parents] have always been supportive my whole life with all my endeavors. They also knew that I loved to speed skate, so when I told them that I wanted to move to California to pursue my career, they made every effort to help me out through that process.”

Clearly, they made the right decision. Celski’s career took off when he won five medals, including two gold, at the 2009 World Short Track Speed Skating Championships. He was then catapulted into fame a year later when he won bronze medals at the 2010 Olympic Winter Games.

Celski was genuinely surprised to discover that he had gained a large fan base overnight. “It was kind of a shock to me when it first started happening right after the Olympics,” he says. “I was walking around and people would say, ‘Hey, is that J.R.?’ And [I would say,] ‘No, but I’ve heard that name a lot. Who is that guy?’ It was kind of hard at first, but I got used to it, and I realized that people looked up to me.”

Celski notes that among this loyal group of fans is a rather large Filipino following. He’s a proud Filipino, and he takes every opportunity to show it, whether it’s appearances at Los Angeles’ annual Festival of Philippine Arts & Culture or the tattoo of the sun of the Philippine flag emblazoned across his chest (something that has delighted many of his fans).

Despite the fame, which has earned him nearly 24,000 “likes” on his official Facebook page and more than 18,000 Twitter followers, Celski consistently emphasizes that he’s just “a regular guy.” And like a “regular guy,” Celski had to juggle high school, speed skating practice and a social life simultaneously. He admits that he had to learn the hard way when it came to balancing everything on his schedule. “I struggled with [time management] quite a bit when I first got into this sport because my practice schedule was pretty intense,” he says. “Sometimes I would go to bed too late, and I would wake up tired in the morning and I wouldn’t have a good performance at practice. My coach would be mad, and I would be mad at myself.”

As his training grew more intense, Celski had other difficulties to manage. During the last Winter Olympics, he suffered a major injury during a crash in the semi-finals, leaving him wondering if he would ever walk again. The blade on his right skate slashed into his left leg, requiring stitches and months of rehabilitation. “This was five months before the Olympics, and that kind of just put a stop in my journey,” he says. “I really had to decide right then and there that I was gonna either stop and give up or push forward and jump over that obstacle that was put in front of me. I think that was the biggest challenge that I’ve ever had.”

It was around that time that Celski began working on a documentary following up-and-coming, Seattle-based hip hop artists like Macklemore and Ryan Lewis. His much-anticipated documentary, The Otherside, made its debut at the Seattle International Film Festival last May. “I think I kind of wanted to get a jump-start into that career,” says Celski. “I’ve always been into film and music and advertising and stuff like that, so I just wanted to do a passion project.” When asked if he thinks filmmaking will be part of his future, Celski doesn’t hesitate to respond: “Yes. I definitely think so.”

Until then, Celski is focused on the Olympics in Sochi. Although the official U.S. Olympic team will not be announced until January, Celski is ranked number one in short track speed skating in the U.S., making him a shoe-in for the Olympic team. “I want to skate to my full potential,” he says. “I’ve been skating my whole life, and I haven’t really, in my mind, reached that level yet. I’m working hard every day, and I don’t try to put a specific goal in front of me because I feel like that just puts a limit on my abilities. If I happen to win medals, hopefully gold, then that would be an awesome thing. But I’m just reaching for the highest level I can go as an athlete.”

Oh, and to answer the question you’ve probably been wondering since you began reading this – yes, he has a girlfriend.

SIX THINGS ABOUT J.R. CELSKI:
1) Favorite food: Sushi.
2) Guilty pleasure: I eat ice cream quite often. Probably more than I should. I like to indulge quite a bit.
3) Wish I could do: A double back flip off the ground.
4) My job in another life: Curling. Nah, I’m just kidding. I don’t know, really. I’d probably be going to school for marketing and advertising.
5) Favorite thing about me: I like that I’ve kind of understood what it takes to be a great athlete.
6) Least favorite thing about me: I don’t like that I wear skin suits. 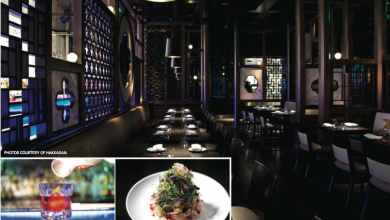 Story by Anna M. Park. Dining at Hakkasan Beverly Hills, the newest location of the esteemed Michelin-star Cantonese restaurant that opened in London in 2001, is not so much […]