Catching Up With SuChin

Pak lives the sweet life as the new face for Daily Candy.

SuChin Pak is sitting, Zen-like, on a plush chair in a whimsically decorated office in New York’s trendy SoHo district. It’s almost superhuman that she is so calm and collected after the whirlwind 24 hours she’s just had.

First, she moderated a morning roundtable discussion with successful female CEOs. Then immediately after, she filmed MTV Iggy’s “Best New Band in the World” special, playing host to a concert that starred K-pop sensation, 2NE1. After wrapping that, she made her rounds with the media, doing interviews in her role as the talking head for Daily Candy, the trendsetting email newsletter and website.

With her brown locks swooping over her left shoulder, Pak is wearing a slouchy gray United Bamboo top paired with YSL stilettos. Her nails are decorated with stickers—black and white, Zebra-striped. “They’re just Sally Hansen, but aren’t they cool?” she quips, brushing off any presumption that she may possess even a hint of haughty sensibilities.

After all, this is the same Pak—once a face of the Girl Scouts—who organically became a role model to thousands of young girls. Through the affable personality she displayed on MTV News and the grounded sensibility she demonstrated with other shows like My Life (Translated)—a series that delved into themes of immigration—the 37 year old became a trailblazer for Asian Americans in entertainment television.

From the red carpet to the Planet Green Network, she’s tackled interviewing the likes of Jay-Z to washing her hair with floor soap for a TV segment.

Since moving on from her gig at MTV News, she’s opened a Pandora’s box of ventures. Like opening an outdoor market in the Lower East Side called the Hester Street Fair that has since become a weekend staple for New Yorkers. Profiled in the New York Times and New York magazine, the market—started with her brother Suhyun and two friends—is planning to expand to other cities. Through that, she’s also become a frontwoman for fashion retailer Uniqlo’s fall/winter campaign, with her face plastered on billboards throughout New York City.

Now she’s planning on tackling her next venture with grace. Pak inked a deal with Daily Candy in September as their on-air correspondent, making her the first and only face of the brand. Amid the whirlwind of activity, Pak took time out of her busy schedule to chat with KoreAm.

How did you get the gig with Daily Candy?

Daily Candy came together because of Hester Street Fair. They were such huge fans of it, and I built such a great relationship with some of the editors there. I think for them it was a light bulb that sort of went off, and [Daily Candy] was looking for the face of the brand. But that’s a really hard, hard seat to fill. They’ve been around for 11 years, they’re so established, and they’ve been faceless in a way because really it’s been about the content of the stories. It hasn’t been about the personality. But times are changing, and content curation and trend expertise is such a huge thing now. It’s such a big difference on the way that the market has changed.

It’s kind of like walking into your best friend’s cool-ass loft and getting to play in her closet and go into the coolest places. It’s a complete and utter dream job. It just goes to show that if you do something you love to do, everything else falls into place. Hester is such a labor of love, and I had no expectations whatsoever from that, and then all these amazing things happened last year because of that.

You’ve been at MTV for over a decade and have become an entertainment icon among Asian Americans. Do you ever miss the thrill of going live every day?

It’s like, I’m a sixth-year senior. College is amazing. You want to stay there. You don’t want to get out in the real world, you don’t want to deal with adults. But at the same time, at some point, you have to graduate and as you’re getting older, it’s like, it gets a little weird. Do I miss it? No. I have such amazing memories and so much of my life and my identity is wrapped up in that time in my life, but you know you grow up. I mean, do I miss being 23? Not really. Did I love it? Yes. But if somebody were to give me a pill and I was 23 tomorrow, I would not take that. And I don’t miss it because I still have so much of what I loved about it in my life.

What did you love most about MTV?

I loved MTV because I got to go to a job that was different every day. I got to be on camera, I got to pitch stories, and I got to do reporting and hosting, and I’m still doing that. It still looks the same, only today I might not be talking about ‘N Sync, I’m talking about young female entrepreneurs.But that’s also what I want to talk about. When I was 23, I think I was really into talking about ’N Sync and Justin Timberlake. It just wouldn’t interest me in the same way. I’ve been really lucky that my career has grown up with me. I think a lot of people fall into that trap of starting off at such a really big place, an iconic place, at such a young age, and their career never grows up as they grow up, so it’s almost a curse. It’s a gift and a curse.

What do your immigrant parents think of your career?

I think that more than anything they were really confused as to what I did for a living and how I got paid and how one builds a career doing this because obviously doctor, lawyer, engineer is the Korean trinity, and I was sort of outside of that. I think, my mom would have loved to see me become a lawyer. But now they find it to be completely and utterly miraculous that I somehow did this on my own. As an immigrant and living in another country, you do everything on your own. Your parents would love to help you, but they don’t know how to do that.

What did you learn from being a child of immigration?

You’ve been a role model to so many Asian Americans. Do you find it important to act a certain way?

I don’t live my life trying to act a certain way for the sake of being good. I think that everyone should live a life as a role model—just making good decisions and being responsible for your own actions.

When did you feel that you felt like you made it?

I think it’s been the last couple of years. Successfully transitioning out of MTV—at least what I was doing at MTV—because that was a worry of mine. I think being in a very stable relationship [helps]. I think I’m OK with being OK with whatever happens. [In the past] when I didn’t have a job or a contract, that would send me into a complete panic attack. Now I know I can take advantage of it, now I think it’ll all work out. I don’t know what I’ll be doing next year, but I’m OK with what’s to come and not knowing. And I can truly say that; I’m not pretending and going home and eating chocolate ice cream in the dark and crying. That’s happened, that’s most of my life. Now I’m OK.

I’m growing up now, it’s a big deal. I’m getting hitched. I don’t really like talking about my personal life. But he’s great, he’s wonderful. And more importantly he does [the website] Awkward Family Photos. He is more famous than I would ever hope to be in many different languages and many different countries. People are like, “Oh, what does your boyfriend do?” I’m like, “Oh, he does Awkward Family Photos.” They’re like, “Oh my God, I love it!” I’m really proud of him. He’s just the loveliest person I know. The nicest, most genuine person I know.

Do you want children in the future?

Yes, of course, that’s the plan. Settling in both L.A. and New York—I don’t see why I can’t have both. But I don’t really know what I’m talking about, maybe it’ll change after we have babies. Maybe we’ll have our own Awkward Family photos one day.

SuChin Pak takes a moment to laugh with her new co-worker, Meredith Howard, director of communications at Daily Candy. “I now know some of her quirks, like when she’s hungry, she makes this face,” says Howard. “Only my mom knows that!” SuChin replies.

This article was published in the January 2012 issue of KoreAm. Subscribe today! 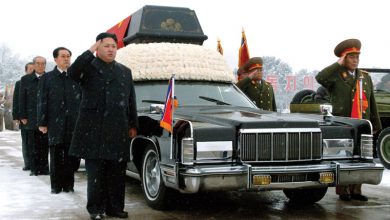 Photo by Reuters/Kyodo The Young, Unproven ‘Great Successor’ Thoughts on the third-generation (third-choice) ruler, Kim Jong Un by Julie Ha As of late December, the North Korean leadership appeared to […]