Jeremy Lin seems to be pulling off a lot of well-orchestrated pranks lately. First there were the dunk cams, then the cake-smashing. Now the L.A. Laker star is scaring museum guests by pretending to be a wax figure.

On August 14, 2014, the LA Laker star was honored with a life-size wax statue at Madame Tussauds San Francisco. Lin, the noted prankster, naturally saw the opportunity to prank the visitors touring the museum and posed as one of the figures by sitting completely still.

Fans and even Lin’s own uncle couldn’t tell the difference between the flesh-and-blood NBA player and the wax statue, and were startled to see what they thought was a statue suddenly come to life.

“They told me they were wax, but that was not a wax figure. That was a real person!” said one surprised visitor.

Lin’s mother, however, didn’t seem too surprised by her son’s prank. 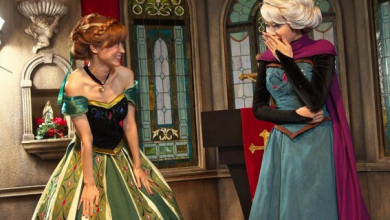 A few weeks ago, we showed you some kickass cosplay of Disney princesses in armor including Frozen‘s popular siblings, Anna and Elsa. As cool as those outfits were, we […]