When the 2010-2011 NBA season tips off this month, there will be a landmark “first” in league history: the Golden State Warriors’ Jeremy Lin will become the first Harvard graduate on an NBA roster since the inception of the shot clock in 1954.

He is a dauntless trailblazer, a torchbearer for future generations of Ivy League hoopsters with dreams of a professional basketball career.

Oh, and by the way, he’s Asian American.

Yes, Jeremy Lin, the son of Taiwanese immigrants, is poised to become the first full-blooded Asian American NBA player in the modern shot-clock era. (According to the NBA, Japanese American Wat Misaka, who played on the 1947 New York Knicks in what was then the Basketball Association of America, was the league’s first nonwhite player.)

In truth, even ignoring his ethnic background, Lin’s story is a compelling one. The details play like a Hollywood movie script. In fact, we’ve seen this arc before, in 1993’s Rudy, in which the titular main character fulfills his childhood dream of playing for Notre Dame’s famed football team, but not before overcoming myriad setbacks and personal obstacles.

In Lin’s case, the Bay Area native grew up cheering for his hometown Warriors, while dreaming that one day he would get a chance to play for them. Despite leading his high school to a California state basketball title in 2006, and garnering several state player-of-the-year honors, Lin did not receive a single Division I scholarship offer. After walking on to Harvard’s basketball team (Harvard does not award athletic scholarships), he developed into one of the better players in the collegiate game, earning first team all-conference honors in both his junior and senior years. Again, despite these accolades, the 6-foot-3 guard was an afterthought in June’s NBA draft, when each of the league’s 30 teams passed on him—twice. The book on Lin was that while he was a heady player, he didn’t possess enough athleticism to make it in the NBA.

Did race play a role in that perception? Maybe. (After all, how many players as accomplished as Lin in college go undrafted?) But then again, maybe not. (The Ivy League isn’t exactly a cauldron when it comes to elite basketball competition—there’s a reason why no Harvardian has played NBA ball in 57 years). So, who knows.

But even if race did play a role, Lin never used it as a crutch. “I was very disappointed [about going undrafted],” Lin told KoreAm, who is ever effusive about his Christian faith. “But like many other times in my life, God took a ‘bad’ situation and turned it into a great situation.”

All it took was an opportunity. Shortly after the draft, the Dallas Mavericks invited Lin to play on their summer league team, the NBA’s equivalent to baseball’s spring training. Essentially, it gives rookies and backup players a chance to improve their skills by playing more minutes than they otherwise would, mostly against undrafted players hoping to land a roster spot. When the Mavericks’ regular backup guard, Rodrigue Beaubois, went down with an injury, Lin stepped in and flourished. He wowed league scouts with his outstanding court vision and better-than-expected athleticism. His crowning moment came during a showdown against John Wall, the first overall pick of the 2010 draft class, in a game against the Washington Wizards. To put it mildly, Lin more than held his own against the much-ballyhooed Wall, scoring 13 points and dazzling the crowd with his effort and intensity.

Watch the now-viral clip on YouTube: the mostly pro-Wall crowd slowly transforms into a mob of Lin supporters as the game progresses, à la the Soviet crowd turning at the end of Rocky IV. Lin’s inspired play drew the interest of several NBA teams, including the two-time defending champion Los Angeles Lakers.

But ultimately, the lure of playing for his beloved Warriors and fulfilling his childhood dream made the decision academic for Lin, who signed a partially guaranteed two-year contract with Golden State. “I signed with the Warriors for four main reasons: terms of the contract, roster space, style of play and location,” reports Lin.

For a cultural pioneer, Jeremy is surprisingly—almost maddeningly—unaffected. He tends to speak in platitudes, but with a genuineness that is believable. For instance, when he states with an aw-shucks earnestness that his paramount objectives are to “live a Godly life and to have fun playing basketball,” it comes across as a legitimate recitation of his priorities, and not some throwaway PR line.

As an NBA player with a Harvard degree, he’s practically the messiah to Asian parents.

Yet, Lin is coy when asked whether he has a girlfriend, respectfully declining to answer. Even his interests outside of basketball are innocent: playing video games, eating good food and, of course, going to church. Again, normal.

Of course, there is nothing normal about his prodigious talents on the basketball court, where he likens himself to a young Dwayne Wade or Steve Nash. Jeremy has a legitimate shot to earn the Warriors’ backup point guard spot (and significant playing time) this season. His goal is to help the team, which had the fifth worst record in the league last year, make the playoffs.

But here’s hoping that Lin’s impact will extend further than the basketball court. Hopefully, the number of Asian Americans playing collegiate basketball—last year, the percentage in Division I was an infinitesimal 0.5 percent—will increase exponentially. And maybe one day, an Asian American playing in the NBA won’t be a newsworthy item. But before that day comes, there has to be a first step.

Big Ballers
Notable Koreans in basketball, both past and present

Ha Seung-jin
The 7-foot-3 center, a second-round pick of the Portland Trailblazers in 2004, remains the only Korean-born player to have ever played in the NBA. Ha, who was drafted 46th overall in the 2004 NBA Draft, played limited minutes for the Blazers before getting assigned to the NBA D-League (the NBA’s developmental league). After returning to Korea to play professionally, Ha helped his team, KCC Jeonju, to the 2009 Korean Basketball League (KBL) championship.

Ri Myung-hun
At 7 feet 8 1/2 inches, Ri was once declared the world’s tallest living man. The former center for North Korea’s national team, “Michael” Ri (after his favorite player, Michael Jordan) appeared headed for fame and fortune in the NBA in the ’90s before
becoming an unfortunate diplomatic casualty. In 1997, after he received interest from several teams, Ri’s bid to play in the NBA was blocked by the U.S. State Department, which cited a “trading with the enemy” law that banned U.S. companies, including the NBA, from doing business with North Korea and its citizens.

Jung Sun-min
Jung led South Korea’s women’s team to surprising fourth-place finishes during the 2000 Olympics and the 2002 FIBA World Championship. In 2003, she became the WNBA’s first Korean player when she was selected by the Seattle Storm with the eighth overall pick of the WNBA Draft. After a nearly five-year absence, Jung returned to Korea’s national team in 2007 and led them to the gold medal at the 22nd FIBA Asia Championship for Women.

Moon Tae-young
Born “Greg Stevenson,” Moon was the leading scorer in the KBL last season, where he played for the LG Sakers. Moon, whose mother is Korean, played college basketball at the University of Richmond, where he averaged 18.5 PPG as a junior. He was drafted by LG in 2009 in the “ethnic-Korean draft” for half-Korean players seeking Korean citizenship. He is spending the KBL offseason learning to speak Korean.

Ha Eun-joo
The 6-foot-8 Eun-joo, Ha Seung-jin’s older sister, signed with the WNBA’s Los Angeles Sparks in 2006. She was prevented from playing, however, due to a contractual obligation to her Japanese club team, the Chanson V-Magic, whom she had led to the 2005 Japanese Women’s League Championship. Ha was an integral member of South Korea’s 2009 national team, which
finished second to China at the 23rd FIBA Asia Championship. 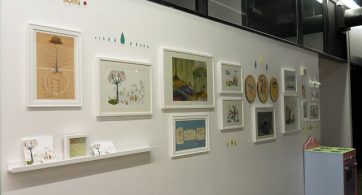 Up and coming LA-based designer/illustrator Christina Song has been getting a lot of attention in the art scene lately: her artwork was displayed at Fashion Los Angeles’s ‘Groundbreaking,’ event […]