The repatriation of nine North Korean youth, known as kotjebi, who were arrested in Laos, sparks international concern.

The North Korean word kotjebi (꽃제비) is fast becoming a household word in South Korea. The word is said to have its origin in a Russian word, kochev’ye, meaning wanderer. Kotjebi first made its way into North Korean lexicon in the aftermath of the Korean War, when thousands of war orphans roamed the streets of Pyongyang and elsewhere in search of food.  There are other theories about the origin of the word.

Some break down the three-character word as a compound word made up of kot (꽃, meaning flower) and jebi (제비, or swallow, a bird that appears in the beginning of summer).  They opine that the wordkotjebi refers to swallows that constantly search for food and shelter.

According to Il Lim, a writer from North Korea, there has not been any formal study done on the term’s origin.

“People just use it as a word to describe homeless wanderers, including kids and adults,” Lim said. “I began to hear the word kotjebi in Pyongyang in 1994, around the time Kim Il-sung died, and a lot more afterwards.” Lim is referring to the time of great famine that began in 1995 and persisted for many years.

Of late, the word is getting international exposure. Last November, Kenneth Bae, a Korean American tour operator, was arrested in Rasun, North Korea, allegedly for photographing kotjebis there. Subsequently, Bae was sentenced to 15 years of hard labor for committing crimes against the state.

Then, last month, nine kotjebis, ranging from age 14 to 22, were arrested in Laos and sent back to North Korea, drawing considerable international attention. What’s unusual about the Laos case was that nine North Korean agents accompanied the kotjebis as they flew from Vientiane to Pyongyang.

South Korean activist Ahn Kyung-su told the Associated Press that he met the North Koreans in April while they were being sheltered by a South Korean missionary in the northeastern Chinese city of Dandong, near the North Korean border. Ahn said the youths appeared to be orphans who were scavenging for food along the border when the missionary offered them shelter in China.

North Korea has accused the South of kidnapping and brainwashing the youths—a charge Seoul has denied.

Kim Kang-shik is a former kotjebi. Now 23, he said in an interview with Chosun Ilbo in Seoul that he had lived in North Korea as a kotjebi since he was 11 years old, surviving “by rummaging through trash and stealing food.”

Originally from Hyesan, Yanggangdo, a North Korean border city along the Apnok River, Kim befriended eight other kotjebi kids and crossed the river to the Chinese side in September 2010. The group roamed together for months, until they met a Protestant minister, who provided them with housing. They were joined by six others, some of whom had been caught and beaten by North Korean border guards multiple times.  The 15 of them lived and studied together under the tutelage of the minister, according to the paper.

Kim and two other orphans would eventually leave on a long journey to South Korea, via a cross-country bus ride through China, Laos, Thailand and finally on a flight to Seoul, a circuitous route of about 7,000 miles. Under normal circumstances, their trip to Seoul would have taken no more than two hours by air, rather than the two-week journey. But there was nothing normal about the orphans, who without papers had to move about under cover.

Kim has been living in South Korea since January of last year. All the while, he has kept in touch with his friends in China by phone. He became excited when he learned that his friends were going to join him. “They were so happy about coming to Seoul, they were giddy,” he told the Chosun Ilbo.

But something happened as the group was crossing the border from Laos to Thailand on May 10. Laotian border guards arrested and detained them because they were illegal border crossers, citing a little-used regulation that had been overlooked for many years.

Kim lost contact with his friends, as the Laotian authorities continued to detain them. He had no idea what was going on.  For that matter, no one else did, that is, with the exception of the North Korean agents, who intercepted the orphans and flew them out to Pyongyang on May 28.

Kim learned about his friends’ fate through newspapers, and he is heartbroken. He says, “I knew them. I had lived with eight of them. It’ll be really difficult for them to come back out once they’ve gone to Pyongyang. I plead with the international community to help them come back out.”

Meanwhile, the U.N.’s human rights agency expressed concern about the fate of the nine North Koreans last month, saying their return to the North puts them at risk of severe punishment for attempting to defect. It, along with several human rights groups, criticized both Laos and China for allowing the youths to be repatriated.

Seoulites, too, are in an uproar over this crisis, confused as to why Pyongyang is so bent on rounding up kotjebis.

South Korean national assemblyman Ha Tae-kyung says, “What have [the kotjebis] done? All they want is a life. And they have that right.  We must keep an eye on this crisis to make sure nothing happens to them.”

—With reports from the Associated Press

This article was published in the July 2013 issue of KoreAm. Subscribe today! To purchase a single issue copy of the July issue, click the “Buy Now” button below. (U.S. customers only. Expect delivery in 5-7 business days). 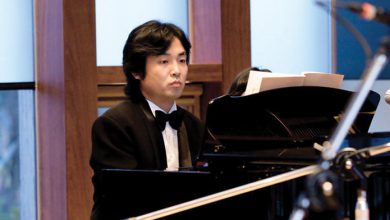 Kim Cheol Woong defected from North Korea not because of hunger or fear of persecution, but for his music. by MICHAEL LAFF When concert pianist Kim Cheol Woong asks […]