Rejoice — Karan Soni is back as Dopinder, Marvel’s greatest taxi driver. And this time, Dopinder is prepared to become every bit an ass-kicking, irreverent observation-throwing superhero as his friend Deadpool.

In 2016, against all odds (after all, it was an R-rated superhero film made on a comparatively tiny budget), “Deadpool” dominated the box office and broke records. Set two years after the first one, the sequel, out in theaters May 18, pits Deadpool (Ryan Reynolds) against Cable (Josh Brolin), a time traveler from the future who arrives to take out a young mutant named Russell (Julian Dennison).

Meanwhile, it turns out that Dopinder, who has been hired as a full-time getaway driver by Deadpool, now harbors greater ambitions than just chauffeuring.

Outside the franchise, Soni’s busy juggling projects. He is due to star as a regular in the new TBS series “Miracle Workers,” which imagines heaven as a corporation that runs Planet Earth. Soni will also appear in “Corporate Animals,” a dark comedy film about a corporate retreat that ends with the team stuck in a cave and fighting for survival.

Here’s Soni speaking to Kore on “Deadpool 2,” Dopinder’s future and the wisdom of Josh Brolin.

Growing up, did you watch superheroes?

I remember specifically loving the Toby Maguire “Spiderman” movies. I had all the action figures for the first two of those movies. When I started in Hollywood, [superhero movies] were not on my radar as something I could ever be a part of. I’m a big fan. I love an underdog story told through a big-budget action lens. What’s amazing about there being so many of these movies is that you get to expand on the genre. To me, “Deadpool” isn’t a superhero movie. It’s an R-rated comedy. I think that’s why I ended up in it. I mainly work in comedy, and you don’t have to look a certain way to be in superhero movies anymore. There’s just more options. It was a very happy accident that I ended up in these movies. I must have done something good in a past life.

In “Deadpool 2,” Dopinder wants to be a superhero too.

What’s really weird is that when we shot the first movie, if you remember, they’re walking up in the junkyard in slow motion, and I drop them off on a bike. I remember filming that. A secret part of myself was like, ‘If there is another one I’d love to do this walk.’ [“Deadpool 2”] was so secretive that I read the script the day before filming. I had no idea what I was doing in this movie. As I was getting to that part, I was honestly shaking. I had to think, ‘Did I say this aloud to someone? So they put it in there?’ It just so happened that the writers and my mind melded. It was amazing. I told them afterwards. It felt so badass. I couldn’t believe it happened.

What do you think his main motivation for wanting to be a superhero is?

To me, it’s not so much that Dopinder wants to be a superhero. I look at it as, he wants more responsibility. It kind of parallels my personal experience working on the movie. Going to the second one, I wanted to show more. That’s what they ended up giving me without me even asking for it, which is amazing. In that scene where I’m telling [Deadpool] what I want with my life, I was being really genuine. I’m ready to do something else and show more of myself. In a weird way, the first time I did this movie I felt like I was playing a character. The second time, I felt a lot more of me in the performance.

In the same way that you envisioned more for Dopinder in the second movie while filming the first, was there something you envision for him for “Deadpool 3”?

Fingers crossed there is a third! I would love to spend one-on-one time with Josh Brolin’s [Cable]. That dynamic seems really weird. Going into this movie, I was a big fan of his as an actor. I was like, ‘My God, we got Josh Brolin to be in this crazy, silly movie?’ Because he’s like an actor actor. [Dopinder and Cable are] two completely different worlds. I want to see a little moment where we’re just together. Personally, I ended up getting along with Josh really well. He is such a man and I’m more of a boy. He just extends this manliness. I’m like, “I don’t know what I’m going to talk to this guy about.” And from the first day he sat next to me, we started to talk about sugar. He was on this sugar diet where he wasn’t allowed to have sugar, salt and bread. He really missed sugar. I was like, “Oh, you like sugar? I can talk to you about this for days.” We really bonded. On Instagram, if you dig, I troll him a lot. I weirdly feel very comfortable with him. I would love to do a one-on-one scene, just to see when Deadpool isn’t there to mediate between them, what would they talk about?

I can see Dopinder like, playing one of his life-advice cassettes for Cable.

Yeah! Or, I just thought of this right now — let’s put this out into the universe — like a training montage. I’m doing like lifting weights and he’s just adding more weights to the dumbbell and I’m just like, sweating. He’s not making it easy for me. He’s making me a man. That’s what I want to do. He doesn’t let me shave. I put on shaving cream and he rubs it off me. He’s like, ‘Grow out that beard.’ Then you just see me as a man. He changes my wardrobe, all of that. Heavy metal rock in the background.

Now I have to ask. What is the most memorable thing Josh Brolin has said to you?

I would ask him acting questions all the time. He’s been around for so long. He was telling me how it was only a few years ago that he felt stability in his career. Which is memorable because I was horrified by it. In my perspective, it really felt like he works all the time. He said it wasn’t until three or four years ago that he would finish a movie and he would know what the next job is. He said he once had a spell where he didn’t work for 14 months. That made me think, ‘OK. I’m going to strap up and just keep going at it, and keep working hard.’ If this guy who has been in every movie also has down periods, then it’s just natural. It gives me perspective when I spiral out sometimes, in my unemployed hours of the day. 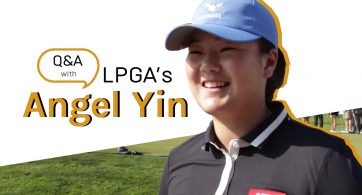 We caught up with LPGA pro golfer Angel Yin at the 12th annual Kore Pro-Am last month to talk about her goals this year and her love for the sport. Yin, […]