One of the highlights of this year’s KCON for many attendees were the artist engagement sessions held throughout the convention.  During these brief meetings, a select group of fans was able to see their favorite idols in the flesh, with the stars only standing only a few feet away from them.  For many, such an opportunity and experience was very surreal; their favorite stars were right in front of them, in the flesh and not just appearing through a glowing screen.

Audrey was fortunate enough to get into two of the most in-demand artist engagement sessions, Bigbang’s G-Dragon and EXO, and we have some exclusive photos just for you!

G-DRAGON
Though he was flying solo, it was no question that G-Dragon was an artist that most KCON fans were excited to see.  Once he got on stage, the crowd electrified with numerous screams of joy and countless professions of love.  That energy remained throughout his Q&A session, especially when he expressed his anticipation and admiration for EXO and his cravings for the California culinary staple, In-N-Out.  Dressed in a simple tank, sunglasses and beanie, he was the charismatic, cool guy that fans have come to know and adore.

EXO
With an innumerable amount of t-shirts with the group member’s names strewn on the front, “Wolf”-inspired outfits and impromptu dance covers of “Growl” being seen all around the convention, it became quickly clear that the guys of EXO were clearly a fan favorite.  Dressed in uniforms, the boys proved their prowess in pleasing fans, having impromptu performances and answering questions in the most adorable way possible (for instance, D.O.’s profession of his love for steak).

With such a jam-packed, exciting weekend, what was your favorite part of this year’s KCON? 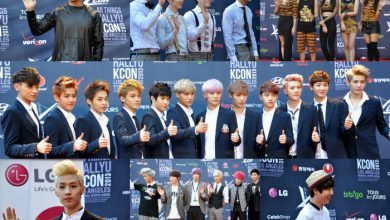 After two jam-packed days of anything and everything hallyu, it was finally time for the convention’s biggest and most anticipated event — the star-studded concert and recording of Mnet’s […]