Helena Rhee never expected her debut children book, “The Turtle Ship,” to be a big success. The book, which tells a story of a boy in South Korea who saved his country by designing a battleship shaped like his pet turtle, ran out of stock hours after its online release on June 5. It was also marked a bestseller and No.1 Hot Release on Amazon’s “Children Asian Book” section.

The book is adapted from the true naval history of Korean Admiral Yi Sun-sin, a household name in South Korea. Illustrated by traditional paper collage, the book uses vivid visuals of cultural details from houses to clothes. Rhee said she hopes to bring the audience “the sense of travelling” to Yi’s world.

But for the debut writer who spent over a decade to finally turn her writing dream true, the book is also a message of persistence for young readers. She sat down with Kore to talk about her new works, ways to promote Asian culture to Western audiences and her never-ending career as a passionate writer.

From the beginning, why did you choose to write about this historical story and what was your creating process?

I’m a Korean American. So the story of the turtle ship and Admiral Yi is actually something I grew up with in my family. Growing up in America, you only know about Western history — at least that’s how it was when I was a kid. There’s so many fascinating stories in Asian history. A Western audience needs to be introduced to the other side of the world. This story is one of them. I started to work on it probably about a decade ago, and I put it aside because I wasn’t very happy about the first draft. And then two or three years ago I looked at it again and know what I was doing wrong. I was telling a story from the viewpoint of the king, but it should be from the viewpoint of Admiral Yi as a child because it would be more interesting to children.

What do you hope your audience, especially your young readers, takes away from this book?

I just want them to have a big dream. Ultimately the story is about pursuing your big dream even if people laugh at you. In the story, the child faces a lot of ridicule when he tries to propose his idea of creating a ship based on the shape of his turtle. But he perseveres and ultimately he wins the contest … It kind of follows the story of me as a writer. I’ve been writing for so many years and faced so much rejection from publishers and agents. It took me a really long time to get published. It’s been a really tough path. So I want to tell a story to encourage anybody out there who have a big dream: Even if people say it’s impossible, just keep trying.

What do you think makes this book popular?

People tell me that the story is fun, but they learn history at the same time. And the story can be charming. A nobody became a hero. … A lot of people just fell in love with the illustrations from Colleen Kong-Savage, because the book is so rich and detailed in the artwork.

How do you translate all the cultural aspects of a traditional Korean story for a wider audience?

That’s a great question. I would do all the research about the time period and the culture. But it’s not exactly what Western audiences are familiar with. The good thing about a picture book is that a lot of things are told by images. So I don’t need to describe they all wore white garments or he had long hair because that’s the tradition of boys of that time period. … I’m hoping that it’s the type of book that people want to really read carefully and study each page to look at the cultural details that are put in the drawings.

Is there a dilemma to write about Asian cultures in the American book industry? What advice do you have for Asian writers to promote their cultures to the western audience?

Yeah, because there is a pressure to write something that’s commercial, that’s easy to sell and attractive to the white audience.I think a lot of Asian artists may think that Asian themes might not be that commercial … But there’s a real audience for it, an appetite for it. Recently I went to a children’s bookstore in Los Angeles and introduced my book. And they say, “Oh good!”, because people are looking for more Asian-themed books and they are not able to find them … I saw a report that only 12 percent of children book writers are minorities. There’s still space for more diversity.

I would say to choose what’s most fascinating about your culture and write about that. People want to see something they’ve never seen before. It’s tricky writing about historical times, because you don’t want to bore you audience with too many details. You have to focus on the story. So it’s a balance.

Your second book is scheduled for release in spring 2020. Tell us more about it.

The second book is going to be a picture book published by Penguin Random House. It’s a story about a small child who finds a way to help his parents. The background setting is actually in Los Angeles and I didn’t specify any ethnicity. It’s open this time. Overall, I want to

write stories that inspire people, no matter what book I write. Even if I write a horror book or a thriller in the future, I want to end with a message of hope. 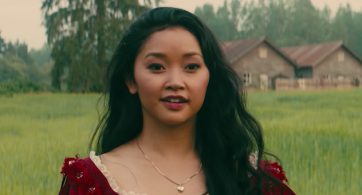 Lara Jean’s life is officially over in the new trailer to Netflix’s “To All the Boys I’ve Loved Before.” Based on the bestselling novel of the same name by […]