Story by Natalie Do

The Oscars are around the corner and my social media has been blowing up with the same hashtag that circulated during last year’s Oscars.  The 88th academy award ceremony is being held February 28th and although live television may not show it, there may be many missing faces.  Many actresses and actors are rumored to be boycotting the award show, including Jada Pinkett Smith, due to the lack of diversity in award nominations.  And by diversity, I include the minority, the Latinos/ Hispanics, the Asians, African Americans, Native Americans, Middle Eastern, and  even women.

Nominations for best performance by an actor in a leading role include Bryan Cranston, Matt Damon, Leonardo DiCaprio, Michael Fassbender, and Eddie Redmayne.  What’s in common for all nominations?  All of them are also men.  Although there are a few breakthrough female stars, a majority of the nominations go to men.

A few 2015 Hollywood films directed by women and minorities, such as “Straight Outta Compton”, “Creed”, “The Revenant”, “Beasts of No Nation”, and “Chi-Raq”, did get Oscar attention, but the nominations in those films mainly went to those of Caucasian background involved.  And here this out, these nominations include Caucasian actors who were nominated for playing roles of Latinos and Asians!

Most of the blame is being reverted to the the voting chairs, but where I think it should really be pointed towards is Hollywood itself and the consumers.  The film industry most definitely fails to represent the diversity of America behind casting doors and drama schools.  If movie-watchers want to see an improvement in diversity in award nominations, they have to first make a change in the steps that lead to these nominations and it is possible.  Studies show that 25% of movie goers are Hispanics and if they, like the actors and actresses tweeting #OscarSoWhite, want a change for diversity in Hollywood, then Hollywood would be sure to listen.

As for my fellow Asians, it’s time for us to step up and make a voice out in Hollywood.  In the last 10 years, only three actors of Asian descent have won an Oscar.  Asians are at the lowest in percentage of nominations for Oscars, at a low of 1%.  Despite the phenomenal Asian actors and actresses gaining attention in Hollywood, such as Constance Wu, Jamie Chung, Randall Park, Ken Jeong, and many more, we need to push for more lead roles and a louder voice. 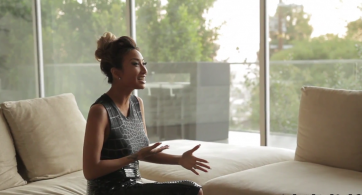 Here it is, here it is!  We’re excited to share with you the behind the scenes of our beautiful photo shoot with the amazing Jeannie Mai.  Here, Jeannie talks […]