I still remember the first time I told off a boy who had gotten on my nerves. I was in sixth grade. “Shut up, or I’ll castrate you and feed your balls to the pigs,” I snapped at the kid who’d lobbed one too many ching chong jokes my way. Suddenly afraid of the small Chinese girl before him, the kid backed away with his hands up. “You’re scary,” he mumbled.

It was lonely and often infuriating growing up Asian in a lily-white town. There were few people I could relate to, and I never saw myself in the books and animated shows I sought comfort in. So you can probably imagine my delight when I stumbled upon Lela Lee’s “Angry Little Asian Girl” comics while surfing the web one day. I was amazed. Here was a girl who embodied the “Otherness” of Emily the Strange and the biting tone of the rabbit from It’s Happy Bunny — and she was Asian, with a tough-love mom and racist classmates to boot. The perpetually scowling, unabashedly angry Kim said everything 12-year-old Susan was usually too afraid to say aloud.

Anger was what fueled Lee to create Angry Little Asian Girl when she was a sophomore at UC Berkeley in 1994. At the time, Lee had enrolled in classes on gender, sociology and Asian American history and was beginning to understand the way society regarded and treated Asian women. “When I went to college, I realized that not only was I supposed to be obedient but I also had to face the double standards of being female and of being an ‘Other,’” Lee tells me now 24 years later. “I felt like it was really unfair to be inheriting all this responsibility and the expectations of a world that was stacked against me, that wouldn’t listen to me, that wouldn’t take my opinions seriously.”

She channeled her frustrations into a cartoon short she wrote, illustrated, produced and narrated. In it, a teacher asks the titular character where she learned to speak English so well. In response, the little girl erupts into an unexpected fit of rage: “I was born here, you stupid dipshit! Don’t you know anything about immigration? Read some real history books, you stupid ignoramus!” It’s hilarious and highly relatable, yet it almost never saw the light of day. After recording the short onto VHS, Lee tucked it away, too afraid to show it to any of her friends until a few years later.

“There is this self-policing that happens with girls who are raised to be polite and obedient. … I just thought that I would be put in my place for expressing myself,” Lee explains. But with some encouragement from her friends, Lee eventually began self-publishing a weekly comic and selling merchandise like T-shirts and bags centered on foul-mouthed Kim and her friends, later rebranding the franchise to Angry Little Girls. It became a hit, resonating with women of all ages and ethnicities, many of whom told Lee that her drawings made them feel less alone. “I get really amazing messages where they say that it validated their experience,” says Lee. “What they don’t get is that it also validated my experience.” 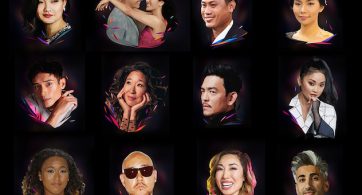 For the past 17 years, we’ve been celebrating achievement in the Asian American community at the Unforgettable Gala, turning the Beverly Hilton into a huge holiday party with all […]