Held at CGV Cinemas in Koreatown and sponsored by Yaamava’, Imperial Family Companies and Laurel Denise, the Sept. 29 premiere of “List of a Lifetime,” starring Kelly Hu, Sylvia Kwan and Shannen Doherty, was a night defined by community care. Directed by Roxy Shih, the film follows the story of Brenda Lee (Hu), whose breast cancer diagnosis spurs her to seek out the daughter she gave up for adoption decades prior, Talia (Kwan), in order to warn her about the genetic risk she may also face.

Before the screening, stars like Hu and Kwan hit the red carpet for a photo-op with the rest of the cast. Accentuated by the lights of camera flashes, Hu’s light pink dress popped against the bright pink background—an ode to the symbolic color of the Breast Cancer Research Foundation (BCRF). Hu’s parents and influencers like Steven Ho and Jessica Lesaca also attended the premiere, as well as many folks in the API community who underwent their own personal struggles with breast cancer.

Once the festivities wrapped up on the carpet, attendees headed inside the theater for a brief Q&A with Hu and Kwan, moderated by journalist Rebecca Sun. The interview topics ranged from questions about character study and representation to insight on common misconceptions about breast cancer. Both actresses acknowledged the intersection of all three talking points. “For the Asian community, there’s a common misconception that Asian women don’t get breast cancer,” said Hu. “I didn’t even realize this until I had to do a PSA for it a few years ago myself.”

Kwan related this anecdote to the release of the film, saying, “Within the [Asian] community, we don’t want to talk about our health so openly, and so this [film] is a good way to maybe even open up that conversation.”

After the premiere, guests made their way to the afterparty, held across the street at Korean pub Star Night. There, folks were encouraged to donate to the BCRF via the QR codes on their tables while mouth-watering food and drinks were served—ending the evening not only on a high-note, but a charitable one as well.

If you missed the premiere, you can catch “List of a Lifetime” on the Lifetime channel on Oct. 10. 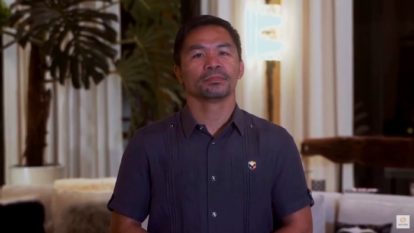 Pacquiao’s boxing career is coming to an end, but he intends to run for president of the Philippines in 2022.