It’s an hour after Manny Jacinto’s call time, which is when the talent is supposed to show up for the photo shoot, and the Filipino Canadian star of NBC’s “The Good Place” is nowhere to be found. The stylists are killing time scrolling through their phones. The groomer has laid out her tools long ago. The photographer keeps pacing around, tweaking the lights and adjusting backdrops. And this editor is calling and texting the manager to find out if there’s an ETA for the actor.

But just before it’s too late, Jacinto (pronounced HA-sin-to) enters the KORE office with a big smile on his chiseled face. Apparently he never got the update with the earlier call time. Now he’s effusive in his apologies and willing to work as efficiently as possible to get the shoot done.

Jacinto has only been living and working in Los Angeles for a little over two years now, but his commitment to the work and his respect for other people’s time has helped him win the hearts and minds of those responsible for his career. When he walked into Sean Burrows’ office nearly five years ago, his work ethic made a huge impression on the Vancouver-based agent. “He has always made this a priority,” Burrows says. “He’s always been super prepared. He always likes to spend a lot of time and do the work before the audition, so he can go in there and have a really good handle on it.” Burrows signed him, and Jacinto’s career has been steadily climbing ever since.

He’s thriving in his fully realized, multidimensional role on “The Good Place,” a primetime television show on a major network created by Mike Schur, the producer behind other hugely successful TV programs such as “The Office” and “Parks and Recreation.” When Jacinto is first introduced in the heaven-set series, he is a non-speaking Taiwanese monk named Jianyu. But his character arc hilariously subverts the stereotype of the Asian Other, because as the plot unfolds, Jianyu is ultimately revealed to be the football-loving, competitive hiphop-dancing, hot girl-seducing Asian American DJ Jason Mendoza, best known for blurting out “Bortles!”—as in Blake Bortles, quarterback of the Jacksonville Jaguars—as his catchphrase. It makes sense, I swear.

“With my generation, I have a lot of Asian friends who are kind of like Jason,” Jacinto says. “I’m kind of the same as well. Asian dudes love to play sports and talk about girls. They go through their trials and tribulations. It’s not just about being smart and all that stuff. It’s crazy to say, but yeah, it’s cool. It’s really a surreal experience getting to play Jason.”

The transition from Jianyu-to-Jason is not all that dissimilar to Jacinto’s own trajectory, with dancing a key common denominator. The original Manny Jacinto was born in Manila, Philippines, and his family immigrated to Richmond, British Columbia, when he was 3 years old. And like Jianyu, Jacinto wasn’t the talkative type.

In high school, he was the quiet kid who tried not to draw too much attention to himself. “I was kind of like a fly on the wall. That’s why I like acting. Because I always observed people and would study how they are,” Jacinto says. “I hate to say this, but sometimes I feel like a people pleaser. I will try to see how this person acts and kind of mimic it to get them to like me. I don’t know, I think it was just a fear of getting beat up or not having any friends.”

Nobody in his family had ever thought of acting or the arts as a viable profession, so his parents forced him to study engineering at the University of British Columbia, ranked the second best college in Canada and from where he graduated. But he knew in his heart that engineering wasn’t for him. Watching the dancers of Asian descent on “America’s Best Dance Crew” changed Jacinto’s life.

“It gave me chills watching those guys,” Jacinto says. “I decided that I was going to try to do that. And I did. I took a class. Did horrible. But I kept going. Because that one feeling that I got from getting one single move was ecstasy. It changed a lot of things for me because I didn’t know all of this art stuff would come out of me.”

His parents did not approve. Worried that he would end up unemployed or homeless if he pursued the arts, they thought he should stick to something practical. Furthermore, they thought that, if he did want to be in front of the camera, he would have to go back to the Philippines first to establish himself. They couldn’t imagine that an audience existed for someone like him in America. “It’s tough with Asian parents, you gotta bypass their doubts and insecurities,” Jacinto says.

Undeterred, Jacinto continued to take dance classes, which led to acting. “I started taking acting classes because I wanted to improve my dance performance on stage,” Jacinto says. “But then it kind of just snowballed. I was like, what is this acting thing? It’s an amazing feeling, so I’m going to pursue this.”

Fortunately, Vancouver is also a major shooting locale for U.S. television and film productions. So Jacinto was able to get steady work, albeit smaller parts. “I would do almost anything and everything, whether it be photo shoots or short films,” Jacinto says. “I remember this one time, there was a photographer who wanted to do a shoot. I think I found him on Craigslist or Facebook or something. And it was getting closer and closer to the day. He was like, ‘Would you be comfortable taking your shirt off?’ And then I was like, ‘Sure, why not, let’s explore that.’ And then maybe two days before the shoot, he was like, ‘How do you feel about not having your pants in this shoot?’ I was like, ‘Uh, can I wear boxers?’ And he was like, ‘Yeah yeah.’ And then the day of, he was like, ‘You know what, let’s play around with maybe some [pubic] hair?’ I was like, ‘No, this is not my trajectory. I’m not doing this.’”

No wonder his parents were worried!

Los Angeles was the hub for bigger roles, so Jacinto made his migration down to Hollywood. “I was living in a house full of Filipino nurses and sharing a bathroom with three other people for $400 a month and grinding it out,” says Jacinto, who continued to go on auditions, take comedy classes and hone his acting skills.

He knew that comedy was his weakness, so he decided to focus on it and diligently applied everything he learned in his classes to his auditions. One was so disastrous that the casting director said to him, “You do know this is a comedic audition, right?”

Clearly he was doing something wrong. So he brought back some of the strategies he learned in his previous acting classes, combined them with new comedy concepts and tinkered around with the techniques. The timing was perfect. “And then I got ‘The Good Place’ audition maybe about a week after,” he says. “I swear if I hadn’t had that bad audition, I wouldn’t have gotten this show, because I wouldn’t have learned from that mistake, which was huge to me.

“The casting director, Allison Jones, liked what I did. She’s amazing. She’s the best. She started laughing and that threw me off because I never made someone laugh in the room before. They called me back. In the callback, I met with Mike Schur, our creator, and Drew Goddard, our producer, and they liked what I did. They called me back for a test. I did the test with two or three other guys. And then fortunately after that I got a call back to shoot with them. And I got the job. Yeah, it was a big moment.”

As the photo shoot begins, Jacinto requests some Motown. “It’s where the music that I listen to now comes from,” he says. “It always has that happy and positive message, rather than sex and drugs and all this hood stuff. I’ve always loved music and rhythm from when I was a kid.” The photographer coaches him into various positions, which Jacinto willingly obliges.

The parallels between Jason and Jacinto are clear. But I ask him how he’s different from his alter ego. “I would hope Manny is a bit smarter or woke or conscious of what’s going on than Jason. I’m definitely not as out there as Jason,” Jacinto says. “I’m shy and soft-spoken for the most part. Jason was who I wanted to come out when I was a kid. With Asian parents, you get disciplined, you get the hanger or the slipper or whatever, so I was forced to be quiet.”

At first, Jacinto was terrified that he would make a mistake and get axed from the show. Unlike the show’s established stars, Kristen Bell and Ted Danson, he and the other lesser-known actors in the ensemble, Jameela Jamil, William Jackson Harper and D’Arcy Carden, the other inhabitants of “The Good Place,” were all new to American network television.

“We are the babies—that’s what we call ourselves because we’ve never done anything of this caliber before,” Jacinto says. “We don’t want to screw it up. There’s just this big fear that we’re going to end up on the streets or have to go back to wherever we came from. It is a big thing. I think we’re starting to get a bit more confident. But in the back of our heads we just want to do our jobs, be good at it and hope to not get fired.”

Now that the show’s in its third season, Jacinto can breathe a little easier as an essential member of the ensemble. After all, how do you kill off a character in the afterlife? He also has a new movie coming out in early October called “Bad Times at the El Royale,” directed by Goddard, in which he plays a member of Chris Hemsworth’s gang.

His agent, Burrows, has high hopes for the 31-year-old actor. “His career could go anywhere, but I would like him to be where John Krasinski is now because, you know, John was on ‘The Office’ with Mike [Schur], and his trajectory has been nothing but awesome. That’s where I see Manny in the next five years,” Burrows says. A Filipino Canadian Tom Clancy character? Perhaps.

The brilliance of Manny Jacinto is that, at first glance, he seems like a typical, good-looking actor type without a lot going on upstairs. But as his stories unfold, you discover that beneath the chilled-out bro-speak is a comedic genius who unwittingly spouts hilarious and insightful observations. And beneath that lurks an ambitious thespian committed to excelling in his craft with steely determination. And beneath that is the tentative little boy seeking to make the grown-ups around him happy (and avoid the slipper), all the while creating a completely new paradigm of Asian male masculinity. It’s been a long time coming. 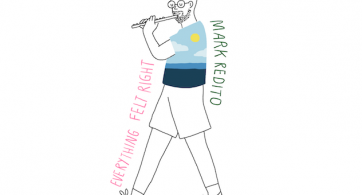 Mark Redito’s new single “Everything Felt Right,” out today, tells the story of a serendipitous encounter with a stranger. Redito, formerly known as Spazzkid, built on his love for […]