It’s almost Valentine’s Day, and regardless of how you choose to celebrate or ignore this romantic holiday, we want to recommend you a unique documentary.

Like many single Korean American women, performance artist Maria Yoon felt a growing pressure to wed from her family and peers. So, she decided to get married, but with a nontraditional twist: She traveled to all 50 states and wedded 54 men, women, animals and inanimate objects. The result of her nine-year-long journey became a 2013 documentary entitled, Maria the Korean Bride.

Self-described as the “voice of the unmarried Asian American woman,” Yoon created the project to challenge the convention of marriage and examine how other cultures perceived marriage. The first generation Korean American artist originally wanted to find a way to provoke dialogue with her immigrant father, who relentlessly lectured her about getting married and once created a fictitious profile on an online dating site to find a potential Korean husband for his daughter.

“My father was like a lion in the jungle,” Yoon told the Herald Tribune. “I knew how important it was to my parents to see me settle down and be secure in this world. So I finally said, ‘OK, so you really want me to get married?'”

That’s when Yoon packed her traditional Korean wedding hanbok and set out to hold a wedding in all 50 states with a videographer in tow. She recruited potential spouses through Craigslist, print ads, random meetings at pubs and connections of friends and acquaintances. No two weddings were the same as each ceremony was a unique art performance piece.

Her first wedding for the documentary took place at the Little White Wedding Chapel in Las Vegas. She married a waiter and a Diana Ross impersonator.

Maria the Bride with Diana Ross impersonator in Las Vegas.

As the project grew, Yoon quickly discovered that finding a potential spouse in each state was a daunting task. While the marriages were not legal, thanks to a contract each participant signed before each ceremony, there were many people who criticized Yoon for desecrating the “sanctity of marriage” and even made racist comments.

“Some states were not very nice, and I learned that racism definitely still exists today. I was told to ‘go back’ to my country, which was startling because I’m American. I carried my passport just in case,” Yoon said in an interview with Yahoo Travel.

Despite experiencing negative receptions in some states, Yoon never left empty-handed and wedded objects, landmarks or animals whenever a human participant was unavailable. Among her 14 non-human spouses were the Liberty Bell in Pennsylvania, a Miller’s Brewery T-shirt in Wisconsin and a thoroughbred horse worth $1 million in Kentucky.

Her most memorable wedding was in Wyoming, where she married a fifth-generation cowboy on horseback in front of a welcoming crowd of 200. She visits her fake spouse every year and receives Christmas cards from his family.

Yoon’s final wedding ceremony took place in 2011 at Times Square in New York, her home state, three days before her 40th birthday. As for what she learned from her last 50 wedding ceremonies is that “love comes in different packages.”

“Some of us are born to have a soul mate; some of us aren’t. But I learned how kind people are in America and how big the country is. Marriage is evolving according to the people, and I think that’s a wonderful thing,” Yoon said, according to Yahoo.

You can buy or rent Maria the Korean Bride here. To learn more about Maria Yoon and the documentary, visit her website or Facebook page. 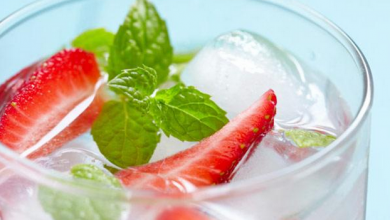 I know, water can be boring to drink. After all, it doesn’t taste like anything. But we all know how important it is to hydrate your body with water […]