Suspenseful and sexy, the film follows an ordinary couple, played by “Euphoria”’s Sydney Sweeney and “Detective Pikachu”’s Justice Smith, as they become entangled with Bordizzo’s Margot and Ben Hardy’s Brent, their attractive and volatile neighbors who live across the street.

True to its title, the primary scenes featuring Bordizzo’s character were shot at a distance through large windows with nearly no audio recorded to reflect the “voyeuristic” nature of the movie’s theme, a unique experience that the actress had never encountered before. “[Hardy and I] always commented on how weird it was that the two of us were in the apartment together alone because the crew is usually all around,” Bordizzo explained. “So you’re like, ‘Yeah, this is my job,’ but we’d just be hanging out and going, ‘Are we being filmed right now?’ It had that element of, ‘We actually don’t know if we’re being filmed.’ We started feeling like we were living the film out in real life.”

A former law student-turned-actor, Bordizzo got her start in the entertainment industry as Snow Vase in Netflix’s sequel to the wuxia classic “Crouching Tiger, Hidden Dragon,” where she first showcased her martial arts prowess. But while she’s practiced martial arts for most of her life, it’s not all that she wants to be known for. “There were a lot of scripts thrown my way to be pigeonholed … as one of those Chinese background or mixed-Asian background … martial arts [characters], but I don’t want that to be it,” she said. “So I think I made a real decision to make the next film completely different.”

Bordizzo went on to explain that although her career has made “no consistent sense,” she finds herself driven to take on projects because of the API representation she provides just by existing on screen. “I swing between wanting to be very outspoken about things versus swinging back to being quiet and silent about them, but letting my career speak for itself,” she said. “I’m just inserting my face into places where it would not have been allowed to be before.”

Watch the full interview to hear more and check out “The Voyeurs” on Amazon Prime Video. 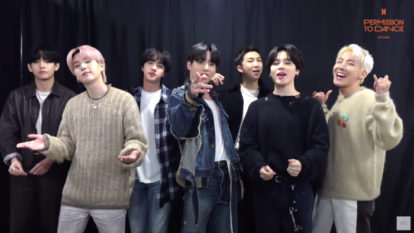 With pandemic-era travel measures still in place, the boy band will live stream their upcoming concert around the world.