By Rebecca U. Cho
Photographs by Eric Sueyoshi

On a chilly night in December, a nondescript truck pulls up to a dark corner. At first glance, the boxy vehicle is hard to distinguish from the hundreds of other taco trucks dotting the urban landscape of Los Angeles, apart from a fiery insignia emblazoned across its side.

But curiously, as an eager crowd presses forward, the drool-inducing smell of Mexican chilies begins to mingle with the delicious aroma of Korean barbecue. These hungry city dwellers are here to meet Kogi, a culinary experiment that has taken the L.A. food scene by storm.

As the truck’s window slides open, signaling the start of business for the night, the first customer in line rapidly lists his order: “One Korean barbecue taco, one pork taco and a special.”

Clearly, this is something different. The mobile sensation serves up tacos and burritos filled not with carne asada, pinto beans and guacamole, but with galbi, bulgeogi and other Korean-style meats.

Inside the truck, chef Roy Choi is oblivious to the cold, his mind set on just one thing — creating heat. He drenches the tacos with his version of salsa roja, a blend of gochujang, or red pepper paste, sesame oil, and Mexican chilies. Then he buries his hands in a bowl of crisp Asian salad, tossing the cabbage in vinaigrette. Meat sizzles at his elbow.

“Nice prep, you guys,” Choi says to the three-person team that is rapidly chopping and grilling in the tight mobile kitchen. His voice is low and calm and laced with excitement for the pending night.

Outside, Rob Burnett, a 32-year-old television commercial producer who lives in the Los Feliz district, sits with his girlfriend. “I’ve never had Korean food off a taco truck before,” he says, noting that he sometimes finds traditional Korean restaurants intimidating. He says he found out about Kogi online and, struck by curiosity, drove in search of the truck.

The internet has been a key component to the success of this quirky restaurant on wheels. Kogi’s small crew of seven keeps in close communication with its followers through its website and gives real-time updates on the truck’s whereabouts through the social messaging tool Twitter.

“On our way to Ivar and Sunset. 5 min,” reads one update.

“Out here @ The Brig. 2nite’s Specials – Korean Mole and Kimchi Quesadilla,” reads another.

Within two weeks of its November 2008 launch, the mysterious white truck making its rounds outside the Hollywood clubs and Westwood became a food blogging sensation. Enthusiastic reviews were splashed across websites such as Eater LA, LAist and LATimes.com. Word spread through Facebook and other social networking avenues.

The evidence of Kogi’s rapid rise in popularity staggered even its founder, Mark Manguera, a former five-star hotel manager and graduate of the California Culinary Academy, Le Cordon Bleu Program, in San Francisco. On one night, shortly after the business launched, Kogi pulled up to the UCLA campus to find hundreds of people waiting in line. The wait for a taco that night was an hour-and-a-half.

The idea for Kogi came to Manguera after a late-night taco run with his sister-in-law.

“I said, ‘Wouldn’t it be great if someone took bulgeogi and put it in a taco?’ I was coming back from a buzz,” he explains.

The next morning, Manguera began forming the talented team. His wife, Caroline, a hotel catering and conference services manager, came on board as the financial leg of the operation. Next, Manguera arranged a coffee meeting with Choi, a decorated chef and old friend of his from the days when he worked at the Beverly Hilton. Choi, 38, graduated from the Culinary Institute of America, worked in some of the top restaurants in the United States, including Le Bernardin in New York, and trained under Iron Chef Rokusaburo Michiba. He recently left his job at Rock Sugar Pan-Asian Kitchen in the Century City Mall, a restaurant he helped open.

During the first month of operation, the culinary duo parked the truck on Ivar Street in Hollywood, satisfying famished clubgoers. A tip from one of Kogi’s customers led them to UCLA. They soon expanded their routes to street-food friendly Venice Beach as well as Los Feliz and Silverlake.

Each day at 1 p.m., Choi and Manguera shop for fresh ingredients, visiting the wholesale markets in downtown L.A. for produce and buying meat from a purveyor. For more than two hours, they prep the truck. Choi gets creative with the specials, which have included spicy Korean chicken mole, a mix of gochujang and chocolate, and vegan sesame leaf taco with Asian pear and pomegranate. Each night, Kogi serves an average of 500 people and 100 pounds of meat.

For Choi, Kogi became an exciting vehicle for him to connect with the people who eat his food.

“There’s a purity to it,” Choi says. “I’m bringing food directly to the people. I give only the best of what I’ve got. If I run out, that’s it. I drive away.”

Last December, the team watched their Korean taco truck evolve into an in-demand caterer. They’ve catered holiday parties for Sony Pictures and The Brig, a popular Venice Beach bar, where Kogi parks three nights a week. Kogi also began talks with MySpace to regularly park outside its corporate headquarters in Beverly Hills for lunch. This month, a second taco truck will make its way to the streets.

Whether Kogi is a hot young fad or a permanent fixture in the L.A. food scene remains to be seen. Members of the team admit they are making up the business plan on a day-to-day basis. But no matter how long the run, there will be no regrets.

“If it all stops now, and everything dissolves, I’m happy for what we did,” Choi says. “People responded and came in droves. How can you regret that?” 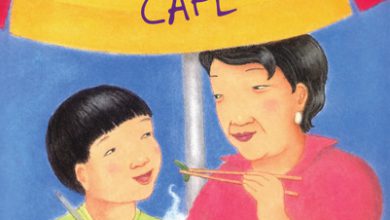 By Serena Kim SISTER ACT – Frances Park and Ginger Park are sisters who have written several books for adults and children. The award-winning authors grew up in Virginia […]