It’s a warm spring day on the Disney Studio lot. I’d made the mistake of wearing a sport coat to the Avengers: Age of Ultron press conference. I’m sweating profusely. It’s not just the heat but my geek cells going into overdrive as I sit a few feet away from director Joss Whedon and the entire A-list cast, including Robert Downey Jr., Chris Hemsworth and Scarlett Johansson, as they discuss comic books and movies. It takes a lot for me to get starstruck, but this? This is too much. I bring this up later as I sit across from 39-year-old Korean American Andy Park, lead character concept artist at Marvel Studio’s visual development department, who has created many of the looks you see onscreen for the Iron Man, Thor and Captain America films.

Park completely gets where I’m coming from. Despite working on almost all of Marvel’s hits, he considers himself a fan first. He recalls when he initially began work on the first Avengers movie, a dream job for him: “The first few weeks, I’d stop painting and realize, ‘Wow, I’m working on The Avengers,’ and then I’d go back to painting only to stop again and realize, ‘Wow, I’m working for Joss Whedon.'” I nod in eager agreement. We’re both admirers of Whedon’s early television shows like Buffy the Vampire Slayer and Angel. Fanboy fist bump.

It’s clear that Park has a deep appreciation for the arts. He’s inspired by other artists and his peers. He constantly has a TV show or movie playing as he draws. He’s continually absorbing inspiration. The more I chat with Park, the more pumped I’m getting. He’s like the Tony Robbins for creative types. There’s something infectious about the way Park loves his profession. He’s confident yet humble, and there’s passion infused in his words as he talks about his projects. And it’s this passion that has driven every major career choice in his life – and many were not easy choices to make.

Park was born in the summer of ’75 in New York, but he grew up in Orange County, California. He had been drawing since he could hold a pencil and became a big fan of comic books in elementary school. It became his dream to become a comic book artist. His biggest inspiration was the legendary Jim Lee, a Korean American comic book artist who is ironically now the co-publisher of Marvel’s biggest rival, DC Entertainment.

“I had a Jim Lee wall full of his artwork,” he recalls. “My dad would cut out Jim Lee articles from the Korean newspaper, and one of them said that he had been studying to be a medical doctor but decided to become a comic book artist, and I thought, ‘Yeah, I’m gonna do that, too!'”

The prediction proved to be incredibly accurate. When Park was only 18, he took his portfolio to San Diego Comic-Con where he met Rob Liefeld, creator of the character Deadpool, which is in development for an upcoming Marvel/Fox movie. Liefeld offered him an internship at Image Comics, then the hottest publisher in the industry and co-founded by his idol, Jim Lee. By 19, Park had dropped out of UCLA’s Fine Arts program to accept the internship. He credits his older siblings for smoothing things over with his parents when he left school. “I did the un-Korean thing,” he laughs.

But after a few years living the dream in comic books, penciling for Extreme Studios, Park wasn’t satisfied. A strong need to improve his skills led to a break from comic books, and he enrolled in the Art Center College of Design in Pasadena, California, to study illustration. He returned to comic books in 1999 with his refined abilities to work on a new comic book series based on the hit video game “Tomb Raider,” which became a number one seller and led to his ranking as a Wizard magazine Top 10 artist. This new fame would be his first introduction to Marvel, where he was recruited to be an artist for popular books like “The Uncanny X-Men,” “Excalibur” and “Weapon X.”

In 2005, passion would again pull him into a new direction, this time leaving his successful comic book career for the world of professional concept art at Sony Computer Entertainment’s SCE Santa Monica Studio. There, he worked as a lead concept artist for the mega-hit, multiple award-winning video game series “God of War” for the Sony PlayStation.

Five years later, Park would join Marvel Studios as a senior concept artist, marking his transition into movies – and not just any movies, but some of the biggest grossing films of all time. He’s done extensive designs for The Avengers, Captain America: The First Avenger, Thor, Iron Man 3, Thor: The Dark World, Captain America: The Winter Soldier, Guardians of the Galaxy, Avengers: Age of Ultron and the upcoming Ant-Man starring Paul Rudd.

What makes Marvel so successful? Park knows the answer without a second thought. The usual movie model for concept art is to hire freelancers on a project-by-project basis, but Marvel decided to create a centralized visual development department to work on everything related to the Marvel Cinematic Universe (affectionately referred to by fans everywhere as the MCU). He adds, “Marvel [Studios] is working like a start-up. Everything is interconnected and agile. You’re creating a family, and you’re creating consistency. And now everyone is emulating the Marvel model.”

There’s a freedom and a sense of ownership as each lead artist owns the iterations of each popular character, building on previous films and evolving them. In Park’s case, he’s been in charge of Hawkeye and Black Widow, or as he calls them, the “normies” (human characters without any superhuman powers). He’s designed for Scarlett Johansson as the Black Widow for every movie after Iron Man 2. (At this point, we take a break as I feel an overwhelming need to pelt him with rocks.)

Park remembers the day when he felt it all came together for him. He was painting a key frame for a scene in The Avengers, where Iron Man is flying towards an alien rift in the sky. “Joss walked up to my desk, saw that frame and said, ‘Oh, we’re gonna have an awesome movie.’ And I was like, ‘Ahhh!’ and a little tear came out of my eye,” he says with a laugh.

After Age of Ultron, Marvel will be releasing in July what some consider a risky move: Ant-Man, about the superhero with the ability to shrink himself. Park was one of the leads on this project and has complete faith that Marvel will once again pull it off. He has a lot of trust in Marvel Studios President Kevin Feige. “A lot of people were like, Rocket Raccoon? Groot [from Guardians of the Galaxy]? Ant-Man? What? But [Feige] continues to prove everyone wrong. It’s nice to have a leader you can believe in and trust.”

As parting words, I ask Park if he has any advice for aspiring artists and creatives out there.”Measure your own work against professionals, not against fellow students,” he says. “Because professionals will be your competition. Get to that level. That’s how you judge your own work. Professionals are drawing every single day and improving. I meet too many artists who just occasionally draw, and they’re discouraged that they can’t improve. That’s why – you only improve in anything if you’re doing it every single day and working hard at it.”

See? Didn’t I tell you that he’s the Tony Robbins for creatives? These are words to live by, and Park’s exponentially growing career is all the proof you need.

Feature image courtesy of Frank Lee.
This story was originally published in our Summer 2015 issue. Get your copy here. 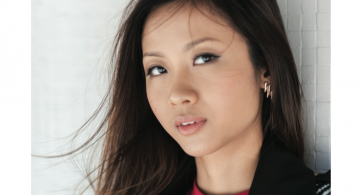