When Michele Selene Ang read the script for her latest role, in Anna Moench’s play “Man of God,” for Los Angeles’ East West Players, she thought, “I have to be a part of this.”

The feminist thriller, based on true events, follows four Korean American teenagers who travel to Bangkok with their church group and their male pastor. They get to their hotel room only to find that their pastor has put a hidden camera in the bathroom. The result is a comedy about being an Asian woman and growing up female in a male-dominated society.

“I was a teenager not so long ago. I remember what that felt like,” said Ang, 24. The cast and Moench, who is also Asian American, had many discussions in rehearsals about girlhood and Asian culture. “I can only speak for Chinese culture because I’m Chinese American, but my Korean castmate said the same thing—there’s a time and place and term for authority figures and for your elders. It’s not something you can readily explain to people who aren’t of Asian descent.”

In “Man of God,” Ang plays the super go-getting, college application-driven Jen, who alongside her friends faces dilemmas about religion and cultural etiquette.

Moench started writing the play before the #MeToo movement, and was able to build on top of it once it gained traction and when it came to covering the intricacies of being young and female in 2019.

Ang’s connection to the play’s director, Jesca Prudencio, goes back to New York City, where they interned together at the same theater company while Ang was studying drama at Fordham University. While in New York, Ang performed in her first play, “Bull in a China Shop,” another female-driven story about two lovers, both English professors, who set out to revolutionize their seminary’s school of thought during the suffrage movement.

“[‘China Shop’] is also about empowerment, and being a woman,” Ang said. “I’ve been lucky to both consciously and unconsciously make decisions to take on these types of projects.”

Ang was born in Surabaya, Indonesia, to Chinese parents. She was 4 years old when the family moved to the San Francisco Bay Area. She loved to perform even as a child and attended a performing arts high school before pursuing acting as a career. Besides theater, her work in “13 Reasons Why”—she portrays the complex Courtney, a closeted lesbian who’s both cunning and manipulative, and is one of the titular reasons for the series’ protagonist’s suicide—has served as a springboard for a world of possibilities.

“My goal is to travel between film, TV and theater,” she said. “I want to have my own show, and I want to write and act and produce. Basically, I want to be Asian Reese Witherspoon.” 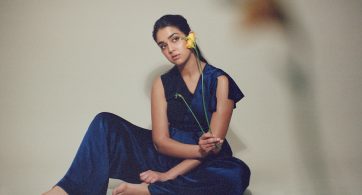 The breakout star of Blockers, Geraldine Viswanathan carries her comic chops into TBS’ Miracle Workers, her first major TV role in the U.S.